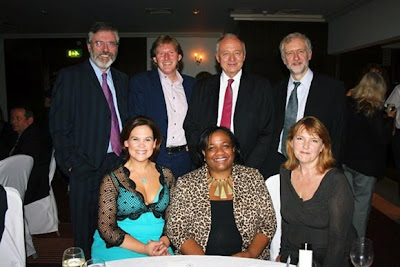 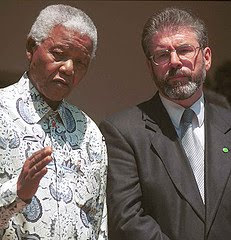 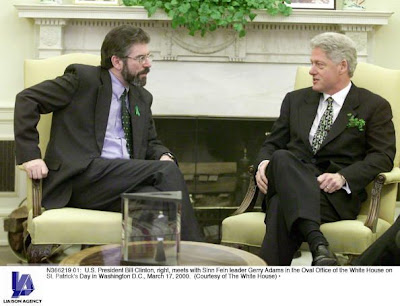 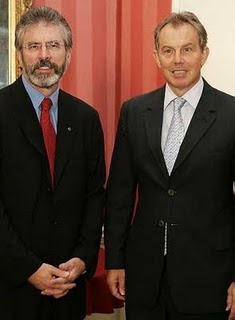 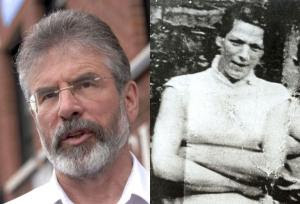 Gerry Adams, the president of Sinn Fein, and, inset, Jean McConville, the Belfast mother who was abducted and murdered in 1972


Whilst Gerry Adams and SinnFein are lauded and feted by the Labour and Tory parties, the BNP, who have never killed anyone nor ever run a terrorist organisation, are abused and denigrated.

No clearer proof is needed that the entire political system is corrupt and sick.

Note the pictures above, scum the whole lot of them.

I piss on the entire political scum that have surrendered to the IRA and who fete the butcher Adams.


Gerry Adams, the president of Sinn Fein, and, inset, Jean McConville, the Belfast mother who was abducted and murdered in 1972

Sinn Fein president Gerry Adams was accused at the weekend of ordering two murders carried out by the IRA, including a notorious incident in which a mother of ten was shot dead and secretly buried.

The accusations are contained in a new book, Voices from the Grave, by veteran journalist Ed Moloney, which is to be published this week. They are based on the posthumous testimony of a former Belfast IRA commander, Brendan Hughes.

In 1972 Jean McConville was abducted from a Falls Road flat in Belfast. Hughes is said to have confirmed the IRA allegation that she was passing information to the British Army via a hidden radio transmitter. For years the IRA denied all knowledge of her abduction, so that she became known as one of "the disappeared", a group of IRA victims who were buried in secret graves. Mrs McConville's remains were eventually recovered, following a long campaign by her family, more than 30 years later. According to Hughes, Gerry Adams ordered her killing as well as that of a republican inmate of the Maze prison near Belfast, Paul Crawford, who died in 1973 in an apparent suicide.

A Sinn Fein spokesman said: "The allegations are not new. Gerry Adams has consistently denied these. In the last years of his life Brendan Hughes was very ill and he publicly disagreed with the strategy being pursued by republicans."

The general belief is that Hughes and the Sinn Fein president were particularly close comrades in the early 1970s. But a breach occurred between them which led to Hughes breaking acrimoniously with Sinn Fein and with Mr Adams in particular.

Hughes's testimony was given in a series of interviews in 2001 and 2002 for a project conducted by Boston College. The college carried out interviews with many republicans and loyalist who were active during the troubles, on condition that the contents would only be made public after their deaths.

According to Hughes: "I never carried out a major operation without the okay or the order from Gerry. And for him to sit in his plush office in Westminster or Stormont or wherever and deny it, I mean it's like Hitler denying that there was ever a Holocaust."

In the McConville case he said: "She was an informer. I sent a squad over to the house to check it out and there was a transmitter. We retrieved it, arrested her, took her away, interrogated her, and she told us what she was doing."

Hughes claimed that one IRA leader wanted "her body left on the street" but was overruled by Mr Adams, who is now MP for West Belfast. "There was only one man who gave the order for that woman to be executed," Hughes said. "That man is now the head of Sinn Fein. I did not give the order to execute that woman – he did."

Posted by Defender of Liberty at 03:31

Ken Livingstone was meeting with the scumbag Adams back in the 1980s.

The Murderer And The Traitor.

You should hear the fat leftist Stephen Nolan lick the arses of these same terrorists on his local radion show. Typical BBC

About the fourth pic down. Is that really Tony Blair or a rejected Madame Tussauds wax-work?

Many Atrocities were commited by the the Adams lead PIRA (Provisional Irish Republican Army) that we don't seem to hear about these days. Terrible atrocities like Warrenpoint.
But least known about the butchery of Adams PIRA was the amount of young Catholic youngsters they murdered and maimed by way of punishment shootings.Executions and knee cappings.Knee cappings were an every day occurence, sometimes it would be both knee caps.The youth, mainy a male who had committed a crime like stealing a car, would have been shot from behind the knee with the bullet coming out of the front, thus creating a larger exit wound.Some youths would have been knee capped up to 3 times. A collusal amount of Catholic youths must have been knee capped.Literally 10,000's of them must have been knee capped in the 60's and 70's.
I remember being on my first patrol in Belfast when the RUC officer with us informed us that there had been a knee capping in the garage we had just walked past.
He said they used a Black and Decker drill to knee cap him. We said "what do you mean" not understanding what he had said.
He said "They drilled through both his knees with a Black and Decker drill"
The butchery of the PIRA was really quiet amazing, they done things to women that you just would not believe.
All done with Gerry's bessing.

unbelievable, but says it all about Labours (Blair already a war criminal), Tory and liberal all fraternising with criminals and terrorists

thereof they are the same

I don't understand, even if you take the view that the IRA were fighting for a United Ireland, the Irish are going to be outbred, and eventually replaced ethnically, the country they supposedly fought to protect is soon to be a mere province of Europe, 80% of our laws, and I presume Irish Laws too now come from Brussels.
What would all those Irish Nationalists in the 20's and 30's have said.

Have they not heard of the Euromed agreement.

The department of the NI police service given the task of solving the three thousand or so unsolved murders during the terrorist campaign against Great Britain is to be closed down.

In his book 'The biggest secret', David Icke refers to Gerry Adams as a Freemason. This is true,he is part of the establishment or the state as some would say.
I believe it was Lenin who said that it was better for him (Bolsheviks) to control the opposition. Now the situation in Ulster has been controlled by their man, Ulster and Eira can get back to being part of the NWO.
These things are planned decades before an event happens.They always get their man/women in there first.

Thank you for running this story. Adams came to a University near to where I live about ten years ago and was given a very big cheque for his propaganda "lecture". All the Lefties loved him, and of course no speaker from the Loyalist or Ulster viewpoint was invited to offer their side of the story! This is how our colleges operate today. They want to tell students what to think, not how to think. (See the the website www.westernyouth.org, Youth for Western Civilization). Keep up the good work! p.s. - Contrary to one of the writers above, the conspirators do NOT always win. But if our side is not vigilant, they will!