McGuniness and the IRA Strategy 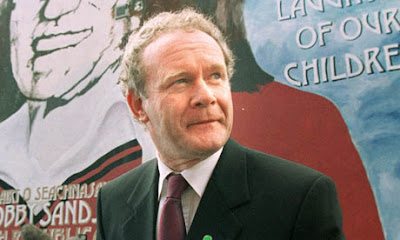 The announcement that Martin McGuinness is to stand as the President of Ireland has exposed the truth behind their bogus ceasefire - all along it was nothing more than a 'Strategic and Tactical Ceasefire' with the true aim being the takeover of the Irish State itself.

The IRA intend to take over the Irish state and turn the Irish army, air force, navy, police, security services, the courts and state into the IRA itself.

This has been their aim all along.

There has been no ceasefire - there has been a long term plan by the IRA to take over the Irish State and obtain its weapons and power for themselves.

Rather than having a few hundred terrorists armed with a few AK47's and fertiliser bombs - they will have tanks, jet fighters and soldiers armed with missiles and other equipment to invade and conquer Northern Ireland.

The IRA are clever bastards - they fooled everyone with their fake ceasefire.

They fooled the Loyalist leaders who are all on the payroll of the British government traitors and who grow rich whilst attending pathetic 'diversity courses' for their cheques.

They fooled the Eire government and people - and the tragedy is that the first victims of the IRA takeover of the Irish state will be the democrats and opposition parties of the Eire.

For an idea of what will happen - look at how the Nazis took over Germany.

McGuinness will do the exact same thing when he becomes President / Chancellor of Germany / Eire.

The IRA will have its quasi-Marxist, pseudo-nationalist state and private army to enable it to attack the North - no doubt with the excuse being another flase flag attack like the Nazis did in order to invade Poland.

The strategy has been so clever - to surrender ground now in order to take power in the future.

Surrender a few rusted rifles sold to them by Gaddaffi and sent to them by the NORAID American scum, and then take power in Eire and turn the Irish army into the IRA with all its arsenals of modern weapons.

Now you know the true strategy.

Posted by Defender of Liberty at 10:00

Bring it on I say, I'd love to see us flatten Dublin, Cork and other cities in the irish republic with cruise missiles and cluster bombs!

Pity our politicians never had such a pressing excuse to do it in the past!

We need to get ready for brandishing some serious firepower in the direction of those argentinians as well now that viable oil supplies have been discovered in the Falklands!

Forget aircraft carriers, I'd just send in our subs and remove buenos aires from the face of the planet!

Overkill perhaps, but its better than a humiliating climb down which would certainly happen if they invaded the islands under our current leadership...

WE NEED THAT OIL!

And there's us British without a political party and the IRA are going from strenght to strenght.