Tomorrow When The War Began and the J-20 Fighter 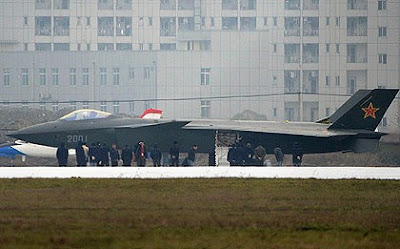 I think that one day, if Australia does not become a republic, then we will have to fight a war against a Chinese ground invasion of Australia.

In the book and film Tomorrow When The War Began, the Chinese invade Australia using conventional forces and the allies of Australia, led by the British and others, have to fight the Chinese in Australia.

There will no be nukes used by any side when China invades other nations in the future like Australia - it will be a conventional war where both sides do not use nuclear weapons. The Chinese will not use them as they will have massive supremacy of troops numbers and the best military equipment like the J-20 to win the war and the west will not use them as they will fear chinese nuclear retaliation.

If Australia is a Republic then the west will not send troops, and Australia will suffer massive losses and the politicians that run the country will surrender Australia to the Chinese.

Only if Australia remains part of the British Commonwealth and not a Republic, then will Britain have the obligation to join the fight to defend Australia.

This is why Australia must not become a Republic - the moment it does then the ties between Australia and Britain which mean we would be required to assist Australia defend itself from a Chinese invasion will be lost.

Australia will have to stand alone - and she will lose.

THE shock unveiling of a new Chinese stealth fighter aircraft has changed Asia's power balance and means Australia must dramatically rethink its regional strategy, according to an Australian analyst.

Peter Goon, a vehement critic of the F-35 Joint Strike Fighter Australia has committed to buying from the United States, says the Chinese J-20 is far superior to the American fighter and Australia must immediately adapt to the new status quo.

The Chinese tested the J-20 for the first time last week, on the day that US Secretary of Defence Robert Gates arrived in Beijing for talks. Although the Chinese claimed the timing was coincidental, Mr Gates expressed concerns about the military's motives.
Advertisement: Story continues below

Lowy Institute analyst Rory Medcalf, a recent visitor to Beijing, said it was possible that the military did not tell the government in advance of the testing, as a way of expressing displeasure at Mr Gates's visit.

Mr Goon, co-founder of the Air Power Australia think tank, said the US and its allies had been ''caught flat-footed'' by the J-20's maiden appearance.

The J-20 has been described by some analysts overseas as ''unimpressive'' and a ''mish-mash of Soviet and American design features''.

But Mr Goon said he believed it was clear from the images of the plane and other material that it was far superior to the JSF, and even to the US's top-of-the-range F-22 ''Raptor'' jet.

''It is basically a lot more stealthy than the JSF, will fly faster and higher, be more agile, and because it's a much bigger aircraft it can carry more weapons,'' Mr Goon said. ''This thing has been designed to compete with and defeat the F-22. They haven't even bothered with the JSF, and why would you?''

Mr Goon said the J-20 had been designed to advance China's ''second island chain'' strategy, which promotes the protection of Chinese trade routes within an area bordered in the east by Pacific islands such as the Marianas, Guam and the Caroline Islands, all the way to the eastern end of the Indonesian archipelago - or most of south-east Asia.

One of the priorities in the government's 2009 defence white paper was the need for Australia to achieve and maintain air combat superiority in the region.

''If Defence does not rethink in a timely, objective and coherent way their current plans we should take them out, put them in the stocks and pillory them,'' Mr Goon said.

''If they don't now redress the situation that's obvious to everyone else as a result of the J-20 and the T-50 [Russia's stealth fighter jet], then they're being delinquent in their responsibilities.''

Air Power Australia has been a loud critic of the government's decision to order 100 of the joint strike fighters for up to $16 billion, on the basis of cost and capability.

The JSF project has been bedevilled by cost blowouts, technical problems and schedule overruns.