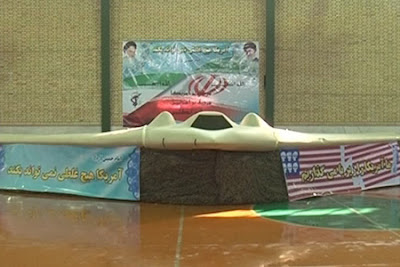 So the Iranian's brought the US drone down by over riding its GPS system and tricking it into thinking it was landing at its base in Afghanistan.

This suggests that the Stuxnet virus that the US / Israel used to attack Iran's nuclear facilities with a year or so ago, has been deciphered, reprogrammed and fired back at the US.

A few months ago the US stated that their entire fleet of drone attack crafts had been infiltrated by a computer virus ;


A computer virus has infected the cockpits of America’s Predator and Reaper drones, logging pilots’ every keystroke as they remotely fly missions over Afghanistan and other warzones.

The virus, first detected nearly two weeks ago by the military’s Host-Based Security System, has not prevented pilots at Creech Air Force Base in Nevada from flying their missions overseas. Nor have there been any confirmed incidents of classified information being lost or sent to an outside source. But the virus has resisted multiple efforts to remove it from Creech’s computers, network security specialists say. And the infection underscores the ongoing security risks in what has become the U.S. military’s most important weapons system.

“We keep wiping it off, and it keeps coming back,” says a source familiar with the network infection, one of three that told Danger Room about the virus. “We think it’s benign. But we just don’t know.”

Military network security specialists aren’t sure whether the virus and its so-called “keylogger” payload were introduced intentionally or by accident; it may be a common piece of malware that just happened to make its way into these sensitive networks. The specialists don’t know exactly how far the virus has spread. But they’re sure that the infection has hit both classified and unclassified machines at Creech. That raises the possibility, at least, that secret data may have been captured by the keylogger, and then transmitted over the public internet to someone outside the military chain of command.

It seems that once again the US has been hit with blowback.

This means that the virus has now taken charge of the US drone fleet.

You can imagine a scenario where the US attacks Iran with Israel and then Iran takes charge of the US drone fleet and turns them back against the US and Israel !

This is the danger of the Stuxnet virus that the US and Israel has unleahed on the world.

Not only was it a direct military attack on Iran, and hence the prelude to WW3, it was also the start of the first real Cyber Warfare Attack.

It used to be that the wars began when the bombs began to drop, now wars begin when emails drop into e mail accounts with attachments that infiltrate and takeover military / civil computer systems as a prelude to an attack.

The Stuxnet virus would have been handed over to the Chinese military who would have copied it and reversed engineered it, just as they are doing with the US drone in Iran and the stealth helicopter that crashed in Pakistan when the US killed Osama Bin Laden.

The US Empire has sowed the seeds of its own destruction.