The Death Of The Nationalist Dinosaurs 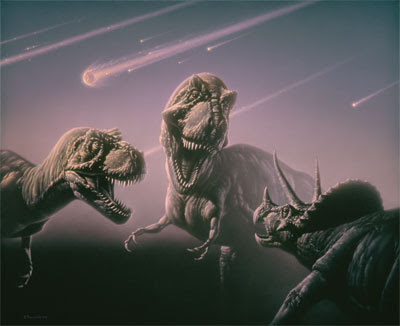 Image - The end of the era of nationalists dinosaurs - fighting amongst themselves as the comet of reality is about to make them extinct.


Reading the British Democracy Forum this morning it appears that yet again Eddy 'Don Quixote' Butler continues to ride his trusty donkey Dapples into battle against the BNP with an article from Claudia Dagleish attacking Griffin, BNP et al.

The question is why.

The BNP is now no longer a functioning political organisation capable of attaining power.

It exists and functions more as a minor league personality cult.

Yet Butler continues to attack it and Griffin.

Butler is a member of the English Democrats Party, which of course since he joined it has seen vast election result wins which have propelled it into almost taking power.

Yet he continues to attack the BNP.

I dont like watching a man on the ground get a good kicking.

Leave Griffin and the BNP alone - it cannot do any harm to nationalism. If people want to be members of a club / cult / then let them.

The BNP is still useful in that it draws the fire away from nationalists who might be undertaking community work - so why destroy it ?

As long as the BNP functions then we can operate under the political radar as the enemy is focused on the BNP and not us.

Griffin has destroyed the BNP and the momentum that was taking it forward in relation to its political mission, so why keep attacking Griffin and the BNP ?

Its a simple answer - Butler is a twisted, spiteful, egotistical little man motivated by his own pathetic sense of ego.

Those that support Butler are supping with a man who is the exact same self orientated old style nationalist as Griffin.

They are mirror images of each other, hence why they hate each other so much.

Both of them are poison for the nationalist movement.

Not that the English Democrats are nationalists of course - any party whose senior financial backer and second in command, Steve Uncles, wanted to unite with Sinnfein and campaign with them in Britain is a party that British Nationalists, as opposed to Butlerite Drones ( also mirror images of the Griffinite Drones ), wouldnt touch with a barge pole.

This is the information that Nationalists still capable of autonomous thought need to wake up and face ;

1) Nationalist political parties are a complete waste of time. They wont take power so why waste time on them.

2) The leadership of all the Nationalist parties are either idiots, crooks, drunks or dickheads (tick as applicable) - you trust any of them you need your head examined.

3) The cult of personality, or Follow My Fuhrer as it has become, has destroyed nationalism. Nationalists think being a nationalist in a nationalist organisation should be like a member of a golf club or a swingers club. To be frank its embarrassing.

4) Nationalist Politics is also a waste of time - there can be no nationalist political victory until community by community we re-nationalise our people. That can only be done via community activism, not pushing leaflets through letterboxes which idiots think can counter the massive media bombardment deployed at election times to support the old parties.

6) Whilst the liberal system exists and is not undermined we cannot grow as a movement - hence Liberal Deconstructionism is required before any political growth in society can occur.

7) The Social Media Discourse Domination we need is not happening - instead the nationalists still fight amongst each other instead of targeting the enemy.


These are the hard truth's nationalists need to face.


All the existing nationalist parties will never take power.

They are all flawed and led by flawed leaders and flawed followers.

Instead of following the political route into perpetual failure like autistic lemmings - NATIONALISTS MUST START TO THINK OUTSIDE THE IDIOT BOX THEY HAVE BECOME TRAPPED IN.

POLITICS IS NOT THE SOLUTION.

POLITICS IS THE END OF THE PROCESS OF TAKING POWER, NOT THE START.


For those nationalists unable to wean themselves from the opiate of politics, heres a simple tip to remember.


The era of punch and judy politics that has become nationalism is a pathetic joke.

Only when the energy, time and effort of nationalists is directed outside of politics and into avenues of activism that will create lasting social change will we start to take our country back.

We dont need to take power to have power.

The politicians only have the control, the people have the power.

A thousand dedicated nationalists linked up into a nationwide movement who work with each other and undertake activism with each other is a powerful dynamic for social change.

The egotists in the political parties will never admit this though - they want your membership fees, your flattery, your obedience, you to stroke their egos and abase yourselves before them like some pathetic fawning catamites.

They want you to worship them, not for us to change society and take power.

The only solution is localised, decentralised, autonomous groups and organisations working directly & indirectly together via a unity of purpose to generate social change at the community level and who can then coalesce at the right moment to create mass social change at the national level.

So back to Butler & Griffin, the EDP and the BNP and the rest of the nationalist parties - they are yesterdays men following the strategy and tactics of perpetual failure.

Unless Nationalism evolves and innovates it will fail.


Nationalism needs an evolutionary moment of Punctuated Equilibrium so that it can undergo a qualitative change.

But like in nature itself, this qualitative evolutionary change is the province of the individual and the few, never the species.

The preceding species of nationalism must die, so that the new movement may arise.

The question is therefore - do you want to continue to follow the dinosaurs into extinction or embark upon a new beginning ?


Do you want to be a nationalist dinosaur perpetually fighting amongst yourselves for an ever diminishing share of the vote - or do you want to join the new species of nationalism that will one day evolve into the mechanism of our liberation ?

I think you have descibed Butler perfectly. His only motivation is a strange pathalogical obsession with Griffin, he just cant get him out of his mind, its bizarre.If he had won his leadership challenge nothing would have changed. I think the ED's have made a horrendous error in allowing him to join, its only a matter of time before there is some kind of coup attempt to hijack that party.
I agree with much of what you have said. we seem to have been going round in circles for years with no hope.There is some kind of battle going on between the various nationalist factions to become top dog. Britain First and the ED's have no hope, i reckon the BNP will remain the only man standing but they will end up like the NF, an ever shrinking drinking club with no hope at all. The main political parties would never allow our 'leaders'or anyone like them into postions of authority, they are big egos fighting over crumbs, their own careers put above their country. Butler, Griffin, Dowson or anyone else you care to mention are just not fit to be entrusted with any leadership role.We are going to face years of stagnation, i just hope that we can pull ourslves together. I really think you have hit the nail on the head with your ideas, but people like Griffin,Butler and others will stifle if for their own selfish interests

Hi Lee,
How familier are you with the National Anarchist Movement??
I recommend that you take a look at their site.
Dan

Talking about nailing it, well done comrade. That's all we need to do now is mobilise, the dead wood will fall by the way side.