Diversity in Medway and North Kent - the scum invasion

Here are a selction of stories from Medway in Kent where I live ; 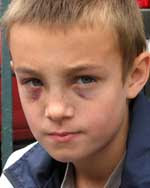 Boy attacked by woman with metal pipe
A BOY of 10 needed hospital treatment after being hit in the face and across the back by a woman wielding a metal bar.The incident happened after community tension spilled over in Luton Road, Chatham.
Police said it was being treated as racially-motivated and an investigation has been launched.
There were four women in the group of people who attacked Jake Stedman. His mother said he tried to run away but his legs collapsed beneath him.Amanda Stedman said: "He's now too frightened to go out on his own and he has to sleep in my bed now because he's so traumatised."
====================================================================
http://www.kentonline.co.uk/news/default.asp?article_id=34652&startrecord=-1.#IND
'Needle' attack girl's HIV fear

Diversity should be renamed Diahroeaversity on account of the consequences of the ideology to destroy the UK.

Its a shame we cant sue the govt for importing this fetid filth.

I could literally weep whenever I visit my local town and see the sheer numbers of foreign vermin wandering about. If ever I overhear a conversation these days in the street then 90% of the time they are speaking in a foreign language.

Ten years ago you were hard pressed to see a black face now they are all over the town.

Ten years ago you would never, ever see a veiled Muslime woman yet today they scuttle about like rats behind their husbands and always pushing a buggy loaded with yet more future terrorist fodder!

When will this nightmare end for those of us born and bred here from generations. My family can be traced back to Kent to the 17th century and we know they go back further than that. Yet, I am treated like a second class citizen in my own country.

Probably not a good idea to flame yourself?