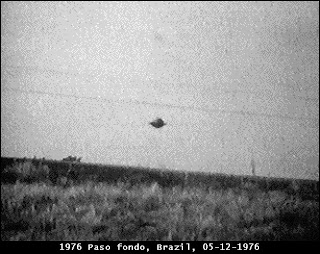 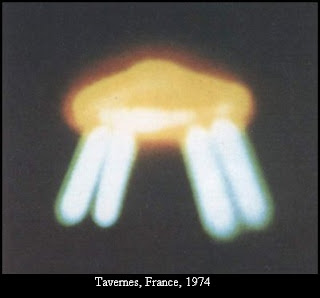 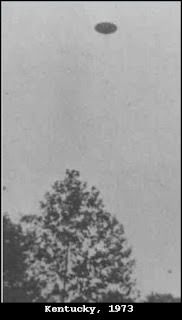 I have seen UFO's twice so far. Once in broad daylight I was walking with my family on a local beach called Upnor in Medway in the early Eighties when I was about 14 and as I gazed up at the top of the tree line of the woods adjacent to the beach I saw a dull grey silver disc rise up and fly over the local woods. It was about six foot long and about six foot wide and rose up into the sky then disappeared back below the skyline as soon as I sighted it. The movement was deliberate and controlled. The object had been lifting itself above the woods from the ground and when it came into eyesight recoiled to the right with incredible speed. As soon it realised it was being observed it dropped back below the trees. This suggests to me that not only was it under conscious direction but that it was aware it was being observed and took direct action to ensure that it could not be observed. It resembled the bottom picture.

The second time was in 2004 and was in broad daylight over Birmingham city centre. The object was filmed by a local man from his garden and the footage was later shown on Central News. It was reported in the news article that the object was caught on the radar of Birmingham Airport. The object was a silver ball with a slight rim around the centre and was emitting what looked like white lasers from the underneath and sides, as if they were somehow stabilising the object as it hovered in mid air. I saw the object for about two or minutes from a train window going into New Street Station. It resembled the top picture with the beams of light radiating out as in the second picture.

The plethora of reports of UFO's from across the world cannot be ignored. Either the governments of the world have access to zero gravity technology and stealth technology decades ahead of what is currently known to be in existence or else we face an alien threat to our National Security. http://www.ufos-aliens.co.uk/cosmicft.html

The former theory may be correct, as some the witnesses at some UFO sightings state that US military insignia are seen on the crafts, but if the latter is true then we have to start dealing with this in a serious way. That means getting the US to admit it nhas these craft, what technology they are using, what the capacity is of these craft, what threat they pose to our national security if the Chinese get hold of the technology and also what the bloody hell have they been doing not giving their closest allies access to this technology.

The first report above reveals that some of these objects have targeted UK military bases for reasons as yet unknown. If they are US planes then the US is in breach of UK airspace but if these are alien objects then the purpose of targeting UK military installations can only be to test our response to these craft.

So far only one government, Brazil, have acknowledged that UFO's exist and they are studying them as potential threats. http://www.disclosureoz.org/brazil-info.htm

The only strategic reason why anyone would want to test our military response to a penetration of UK airspace and also to test the response of military personel at UK military installations is if they have an intent at some time that threatens those installations and UK national security.

I believe that one of the most important issues that affects our national security, and has yet to be taken seriously as an issue, is the UFO issue. If the US have craft with the capabilities we see in UFO's then we are wasting billions and billions of pounds per year in buying planes like the Eurofighter. These advanced alien or unknown military craft render all our present military weapons systems and defence systems obsolete. This means the UK is at present totally vulnerable to an attack from these craft. The fact that spies have penetrated the US military for decades and leaked information to the Russians and Chinese, and also hackers are being used by the Chinese to penetrate and steal US military information, means the technology of these craft will at some point be in the hands or our potential enemies. The fact that these craft, if they are US weapons systems, have to be built somewhere also means that corporate espionage threatens to leak these technologies to our enemies.


This is unacceptable. Either the US reveals whether it is the source of these craft, and what the hell they think they are doing with them when they penetrate our airspace and threaten our military establishments, or we have to take a far more proactive approach in dealing with them.

If these objects are of alien origin then we cannot adopt a 'hope for the best attitude' with them. They are potential threats and must be dealt with as potential threats. They are not just threats to the Military-Industrial Complex but also the average British citizen. They were regarded as potential threats by both Winston Churchill and Lord Louis Mountbatten, both of whom were military pragmatists. http://www.nickpope.net/ufos_conspiracy_or_indifference.htm

The issue of alien abduction also needs to be addressed. If alien abductions are real, as many eminent psychologists and scientists now acknowledge, then this means we have to adopt a far more assertive stance against these objects. The many cases and testimony of people abducted by these craft suffering horrific procedures suggests they regard us almost with as much contempt and compassion as we regard cattle. It appears they have an agenda that, unlike the liberals, has no respect for the ideology of universal human rights.

This whole area of national security has yet to be studied and researched properly. One of the things I will be pushing the BNP into doing is that when we are in power we will order an immediate Public Inquiry with the power to call witnesses and order the release of classified military documents concerning UFO's. If the inquiry finds that the presence of UFO's exists then we will then demand a formal response from the US, China, Russia etc as to what they know and if they are in charge of these craft that are penetrating UK air space.

I am a supporter of the Disclosure Project http://www.disclosureproject.org/ and at this site a whole range of documents are available to study.

The UFO phenomena is not the subject of cranks and weirdos, it is a national security interest.

During the Second World War on the 13th of June 1944 people in Essex saw a strange metallic silver object flying through the sky that exploded when it hit the ground. At first the government and the public thought the witnesses were mistaken and had seen merely a German plane dropping bombs. The people who saw them were laughed at ridiculed.

Over the next few months 1,435 of these objects hit south-east England. They were the V1 Flying Bombs and until they appeared in the sky over Southern England no-one knew the Nazis had such advanced technology.

Those who have spent decades scoffing at those who have seen UFO's are the sort of people who ignore reality until a bomb drops on their house. We cannot wait until a fleet of UFO's appears in our skies with some sinister intent as they did during the Battle of LA http://www.rense.com/ufo/battleofla.htm.

Those that scoff at those of us like Winston Churchill and Lord Mountbatten and myself who see the issue of UFO's as primarily a national securrity threat are the real cranks and weirdos.

Those of us who want answers are the real pragmatists and patriots.
Posted by Defender of Liberty at 04:05

You are totally correct on this subject.

It is regrettable that many folk in the Party might prefer to admit openly that they are BNP members before they admitted to believing in UFOs, if they did.

But this phenomena must be highlighted as you have done, especially with respect to its most alarming features.

2) Abductions. Many abductee reports exist. I'm sure I've also read that some abductees have been interviewed by psychiatrists without prior knowledge of the interviewees' ordeals. The psychiatrists have concluded that the individuals respond like someone who has undergone a serious physical (or sexual) assault - as is indeed the case.

Individuals who have reported UFO incidents in both this country and overseas have also been subjected to intimidation by sinister visitors to their homes who pose as government agents but aren't. They are sometimes referred to as the MIB, the Men in Black.

Any scoffers who deride your article ought to consider the words of US Ufologist, Bud Hopkins, who has investigated many abductee cases. In his book Intruders he said:

"I'm so scepticial that I find it beyond me to deny the possibility of anything."

I see the UFO menace - using that word deliberately - as the ultimate end of what the BNP is resisting.

The BNP, essentially, is resisting a determined effort on the part of our national leaders, i.e. politicians, (un)civil servants, journalists and other media personages, chief constables, apostate clergy, 5th column 'tame' academics etc. to degrade Britain into an impoverished, mongrelised mess with no more national identity or individuality than a hog pen and as easy to dominate.

Consider the current establishment views vs. the truth:

'Men and women (and even children) are the same.' They're not.

'Blacks, Caucasians and Asians are the same.' They're not.

'Straights, sodomites and 'bi-sexuals' (part sodomites) are the same.' They're not.

'Marriage, cohabitation and serial bigamy are the same.' They're not.

'Christians, Muslims, Jews, Hindus, ahteists, agnostics, communists, capitalists etc. are all the same - i.e. we can all peacefully and productively co-exist in a utopian multi-culti global village.' They're not and we can't.

'All nations of the United Kingdom, Europe and the world are the same.' They're not.

'Humans and animals are the same. Darwin was a genius.' They're not and he wasn't.

This last is the ultimate blasphemy and the dark heart of the UFO phenomenon - to clag the whole creation into a world-wide sub-species of man-animal-machine monstrosities.

That is the ultimate nightmare scenario in genetic and social engineering.

The West is being prepared for it gradually but surely, e.g. by contributions like Star Wars. Observe how the humans, animals and robot machines all got along so swimmingly together in that particular series.

You'll probably be familiar with the names of various UK UFO researchers such as Jenny Randles but a book that sets out a plausible thesis for the phenomenon is Black is Beautiful by Dr Peter S. Ruckman, a Baptist minister in the US who has studied UFOs for many years and sighted several.

It was written about 12 years ago and although the author's dire forecasts have not come to pass as yet, I believe his thesis is still valid.

You can check it out here.

I have been in communication with Bud Hopkins in the past and found him a fascinating and lucid person on this subject.

The UFO threat is a real threat and one that we must address.