The Greatest Revolutionary of the 20th Century 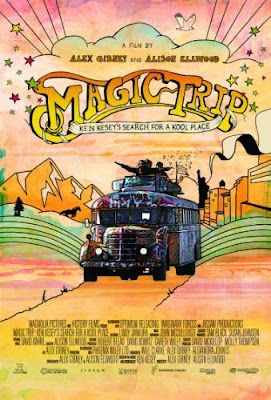 I watched an excellent documentary the other day called The Magic Trip.

It concerned the epic journey across America that began on June 17, 1964, when Ken Kesey and 13 Merry Pranksters boarded the psychedelic painted bus "Further" at Kesey's ranch in La Honda, California, and set off eastward.

The bus trip was notable for many things, but most of all was its occupants use of the psychedelic drug LSD.

Ken Kesey whilst at Stanford University in 1959 took part in CIA sponsored LSD tests on students at the school for cash. These tests were part of the top secret MK Ultra Programme to ascertain the effectiveness of LSD as a weapon of war, the aim being to spray LSD on enemy soldiers and then disable them when the drug took effect.

Whilst undergoing the acid trips given to him by the CIA, Kesey realised that the drug allowed him to undergo experiences that enhanced and increased his consciousness.

After leaving Stanford Kesey ordered the drug from Germany where it was being produced for sale, at that time it had not been criminalised, and imported it into the United States. Then began the famous Acid Tests, where individuals were introduced to the drug.

Why was Ken Kesey the most succesful revolutionary of the 20th century ?

The aim of the revolutionary is not to just overthrow the political / economic system.

For most of the 20th century the Communists and Capitalists had been seeking to do exactly this.

The aim of Political Correctness, Cultural Marxism, Capitalism, Communism and Liberalism is to imprison people inside an ideological construct via controlling their consciousness via propaganda, education, advertising and media conditioning.

All the tyrannies of ther 20th century had all been following the agenda of the anarchist Bakunin who realised that the only long lasting revolution is one that changes the consciousness of the people themselves.

Orwell also wrote of this in 1984 when he wrote of the words that hed been removed from the dictionary and concepts criminalised by the Big Brother State - and we see this in our societies today.

The insidious, creeping tendrils of political correctness suffocate and repress all forms of speech, thought, art, writing etc etc that conflict with its orthodoxy.

The power of the state is used to criminalise and repress any opinions or ideas that conflict with the politically correct orthodoxy that dominates our societies.

Capitalism peddles false needs for commodities and status symbols into peoples minds via the power and propaganda of advertising.

We but crap we dont need and dont even know why.

Obey, Work, Consume, Reproduce - the mantra of all slave masters throughout history.

Nothing changes - except the speed and efficiency of the system to enslave its population with cheaper consumer goods and commodities obtained via raping and destroying the environment and the planet.

The aim of all this tyranny is to change the consciousness of people - to condition the masses into accepting a form of Soft Totalitarianism that socially engineers people into becoming good consumers and wage slaves obedient to their masters in power and the media.

Anyone who deviates from the orthodoxy of the system is designated a criminal or a maniac and locked away.

At the same time each individual is yoked from birth via conditoning with an inner censor that stops them from saying what they think or feel, for fear of being arrested or attacked.

Man is no longer free, man is yoked and enslaved by mental chains placed on him at birth and then reinforced at school, university and within society itself.

At every level of our existence our consciousness is moulded and manipulated to ensure we remain dumb complaint animals yoked to the lies that our masters use to manipulate us.

Yet Ken Kesey broke on through this slavery via the use of LSD.

LSD allowed him to create a new higher consciousness that could no longer accept the lies he was told and forced to genuflect before.

One awakened as a man, he could no longer remain as a slave.

LSD changed his consciousness, and by so doing he escaped the control of the system.

By undertaking the trip across America he introduced others to the drug and thereby created what came to be known as the Psychedelic Revolution.

The Psychedelic Revolution overthrew the mind control mechanisms of the system.

It allowed individuals to rediscover their individuality.

It still is today.

The Nationalist movement has for decades placed itself in opposition to the Hippies / free thinkers of the planet.

Nationalists have attacked and condemned the very people who most of the time have been the primary obstacles to the systems dominion.

The system is not afraid of Nationalism, for Nationalism is no longer a threat to the system.

Most of the forms of Nationalism that exist today are merely adjuncts to the system -they do not represent a threat to the system, its masters and the machinery of its oppression.

The forms of Nationalism that exist today seek have the same masters pat them on their heads.

The new boss under nationalism will simply be the old boss.

In fact Nationalists have been the first to cheer the activities of the system, usually whenever the system has waved a plastic flag made in some Chinese slave factory for the nationalists to salute such as before and during a war.

Nationalists no longer oppose the system - they seek to serve it.

Even today we hear news stories of Nationalists attacking anti-capitalist protestors in London and Bristol.

Since when did Nationalists become the para-military wing of Global Capitalism and the Banksters.

Nationalists should be manning the barricades with the hippies against the system, not attacking the protestors and supporting the system.

Nationalists should be leading the protests against the Banks and Bankers, not beating up the people who oppose them.

Yes the Communists who oppose Capitalism work for the Capitalists, we all know this.

The communists and capitalists are both slaves of money.

What is the point of a communist opposing capitalism when communism is merely another form of slavery to capital ?

We need a revolution that overthrows the supremacy of capital itself, not a communist one that replaces one set of bankers with a new set of bankers.

The Nationalist Revolution must not seek to perpetuate the supremacy and power of capital, it must smash the power of capital and in its stead create whole new forms of economics that will save the planet, our people, our environment and our nations and cultures.

A Capitalist is merely a better dressed Communist.

Nationalism doesnt seek anymore to overthrow Capitalism, it seeks to subjugate itself to the power of Capital and those bankers who control the money supply.

We must not seek to perpetuate the Capitalist system, we must dismantle it and create new economic systems in its place, so as to ensure that never again will its power rise to the level it has today - where war is an extension not of politics but of economics and where our national armies are used as global mercenaries to invade, conquer, rape and pillage the nations of the world for their wealth and resources.

Nationalists no longer THINK, they OBEY.

Nationalism has become part of the problem, not the solution.

The Nationalist movement must undergo an evolution - it must shed much of the ideological baggage it has ammassed over the 20th century.

It must become a movement based on restoring Liberty, Individuality, Community and Environmentalism within the context of sovereign nation states run by the people for the people.

Nationalism needs a Ken Kesey to allow it to undergo a revolution in consciousness.

Only then will it throw off the shackles of mental slavery to conditoning and conformity to ideologally that have ghettoised it and marginalised it.

We need free thinkers and creative personalities in Nationalism, not abasers and genuflecters.

Creating that movement is the challenge for Nationalists in the 21 st century.

Only those who are clad in chains have to led by masters.

Those who have experienced a change in consciousness no longer need to be led.

They lead themselves and create the revolution wherever they are.