WW3 and the Bankers 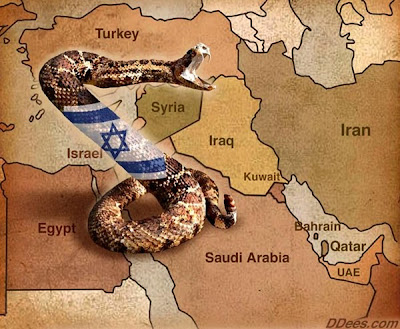 Image - The Zionist Imperialists strike out at their enemies. WW3 is about to begin.


The Banker Fascist takeover of the world is almost finished.

The politicians passed the laws that created the economic collapse in order to pave the way for the bankers to take over politics and economics.

Our governments did not nationalise the banks, the bankers privatised the governments.

The Global Corporate Fascist State run by the Zionist Banksters is here.

The war against Iran is about to begin, a war undertaken in the name of defending Israel when Israel has 300 illegal nuclear weapons.

Iran is no threat to Israel, Israel under the control of the Zionists is a threat to the whole world.

The Iranian and Israeli peoples are both under the control of maniacs - the Iranians the Islamists, the Israelis the Zionists.


It seems bankers are taking over politics in Europe, financial analyst Max Keiser told RT, adding that this trend could lead to global banking domination.
­“We cannot get rid of these zombie bankers, we can’t kill them,” said Keiser, host of RT’s Keiser Report. “Iceland thought they had killed off their zombie terrorist bankers, but they have risen again and are now sticking Iceland. They are a plague around the world, and certainly in Europe. There are no elections, but they are putting bankers in charge to bring back total banking domination as the world goes down the slippery slope into banker hell.”

According to Keiser a very small elite continues to benefit from the disastrous situation in the eurozone, which continues these same ploys that it has carried out over the last few years.

“There used to be a thing called moral hazard where if banks took risk, they would be at some point penalized by the system, but now the more risk they take the greater the rewards they get,” he pointed out. “JP Morgan is now going to step in front of the allocated accounts of customers and actually steal money from their accounts. We haven’t seen this level of larceny and theft since the Nazis stole assets from people in Germany in the 30s. This is outrageous, this has not been done in decades. There are no regulations in place at all! Interest rates are zero per cent, so I expect more of the same,” he added.

According to Keiser, this means the financial elite work together with the European Central Bank and keep interest rates near zero per cent, because this allows them to fund their speculative investments at zero cost.

“They don’t want to spend any money to borrow money and put outrageous bets on the table. Every time they lose a bet, then they impose more austerity measures. Every time they win a bet, they keep 100 per cent of the profit,” he claimed.

He also stressed that putting bankers in political positions resembles the behavior of someone who has been a victim of crime.

“People keep saying the bankers know best. But the bankers are the ones who have stolen all the money, so are we going to give them more ability to steal more money and impose more austerity measures? But that is insane,” Keiser concluded.

­Paolo Raffone, founder of a Brussels-based non-profit organization, the Chipi network, told RT the eurozone has been pushed too quickly as part of the European project.

He also added the eurozone will have a new setup in future, even if all the current EU and eurozone members get together again.

“The way the union is functioning will be different, otherwise it may split up,” he added.