UPDATE to the UPDATE 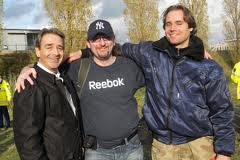 
I note the comments from Peter Stafford about ALan Lake and the British Freedom Party - the issue is not that the party has direct links with Alan Lake, the problem is Alan Lake set up the EDL with Chris Knowles and they put Tommy Robinson into his position as leader of the EDL.

The fact is that Alan Lake even gave the EDL their name !

The Zionist direction of the EDL was decided by Alan Lake & Chris Knowles.

Tommy Robinson was appointed by them to run the EDL.

As long as the EDL is led by Tommy Robinson and the Zionist clique around him - then the British Freedom Party is an willing party to the Zionists around the EDL.

As for Paul Weston - Paul is a nice guy and a man I respect - but he has been drawn in too close to the Zionist clique around Alan Lake, Tommy Robinson and Roberta Moore.

Posted by Defender of Liberty at 12:26

Lee many thanks for this clarification, of what goes on behind the scenes, interesting.

I need to ask you this. Are you (as reported by the yellow sparrow) a zionist?

Whilst the idiot Paul Morris was boiling his beer in the welsh swamps, I was attacking and exposing Zionism.

Do a search on this blog under Zionism and see how long I have been exposing it.

Morris is an idiot and an anti-semite.

He doesnt realise that equating Jews with Zionism is wrong - the most high profile anti-zionism campaigners in the world today are all Jews - Noam Chomsky, Gilad Atazmon and Norman Finkelstein.

The most evil Zionists in the world over recent deaces have been gentiles - Bush, Blair, Brown, Cameron and Obama.

Paul Morris and his little cabal of catamites are a pathetic joke - the man is an oaf who attracts only other oafs around him - like a dog turd attracts flies.

Lee, you should be so subtle, people need to know the truth of his perversions, his latent homosexuality and thieving from a defenselessness grieving widow as well.

And what, pray tell, is so bad about the JTF or indeed, their particular brand of Zionism?

This is whats so bad about the JTF - they are anti-gentile racists, anti-christian bigots and linked with terrorists ;