A Walk Down Canal Road In Strood 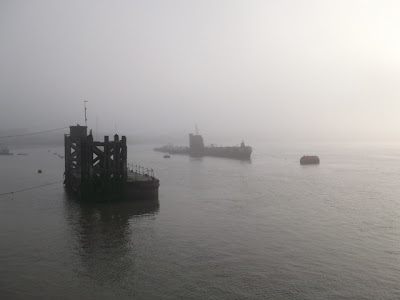 A Walk Down Canal Road In Strood.


If Dickens returned he wouldnt recognise the place,
Like a battered housewife with a broken face,
The hooting boats that chugged the tide,
And clanking cranes along the river side,
Are now rusting wrecks, offshored and globalised.

The Railway Tavern where I once used to drink,
Is now a gay bar seeking pounds that are pink,
Built where the Medway on a high spring tide,
Still rises to flood the snug with its filthy brime.

The call of a curlew in the misty fringe,
Drifts over the groaning recycling bins,
Sifting the shore where a soviet sub rests,
Beached like a whale, slowly rusting to death.

As whores in short skirts who work in spurts,
Seek paying strangers, their addictions curse,
Out from dusk to dawn in a life forlorn,
Is this the reason for which they were born ?

In the morning workers walk the dog shit path,
Past concrete playgrounds devoid of grass,
Dodging the rabid pitbulls of chavs high on PCP,
Who seek the slow bleak death of this liberal liberty.

Then back along the same cruel street at night,
Tar black dark, lit with febrile orange light,
Where lurk gangs of hoodies who carry knives,
For whom 'respect' means more than human lives.

Posted by Defender of Liberty at 02:29

Some impressive flashes there