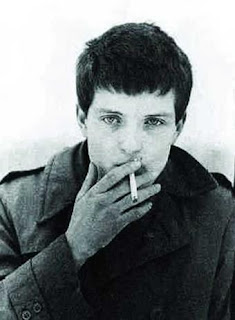 The story of the Joy Division singer, Ian Curtis, is the archetypal rock tragedy.

The great singer and writer who struggles to become known and is then destroyed by fame.

We have seen it so many times in history, the coruscating genius that appears amidst the gloom and darkness of a culture grown ashen and moribund who suddenly illumues the world with his flame and fire for a few precious fleeting moments then flashes swiftly back into the black.

Nick Drake, Richey Edwards, Phil Lynott, Hendrix, Jim Morrison and Kurt Cobain - each of them gave the world back a little of its glamour and magic but in so doing they paid the ultimate price.

Perhaps it is true that the more sensitive the soul, the harder their truth is to bear and this is why so many of those precious voices of a generation are lost so young. Through allowing the spirits of their times to speak through them what they articulate in the end destroys them.

The bio-pic of the singer Ian Curtis is the reflection of a Britain and a time that almost seems unreal now, a time when grey skies curdled constantly over tired and wilted cities of rain washed rock and brick, a time of strikes and secondary pickets and when the spectre of a nuclear doom always seemed somehow silently present like an unseen demon in our midst.

It was a time when factory horns called the workers to their benches, when a febrile sun the pallour of jaundiced skin, tore tiny holes through the drifting haze of a pollution pall that suffused the sky from factory chimneys that never stopped smoking and when kids still played football in the streets and swopped Top Trumps for Spiderman comics.

It is as though such times almost never existed now, they seem so distant. A world away in the streets where still we walk.

The film catches this time perfectly. From the cotton rainbow striped pillows on his bed, the music of Bowie and Iggy Pop, the mood of fashionable nihilism, the fascist aeasthetic all black clothing, the streets of terraced housing and conformist misery.

Yet it seems like a historical movie, not the story of a tragedy that occured less than a quarter of a century ago. The flat of his manager was like a flashback to the houses I used to sit in and listen to Joy Division, Velvet Underground and Lou Reed as Ford Cortinas pulled up outside filled with lads who been working on the engines of the nuclear submarines at Chatham Dockyards. A period when punk was replacing glam rock and skinhead gangs still fought with mods at Brighton, and when A Clockwork Orange still wasnt able to be bought on Betamax.

A time of transition and change, when poets like Ian Curtis appear in order to reflect back at us that which we try hardest not to see.

The nadir of the Cold War was reached when Game Theory transformed millions of people into abstractions on a computer model that simulated a winnable World War 3, when our Isolation and anomie became such that the confrontation between the super powers literally became M.A.D.

This is why Ians words and music were so bleak, he felt this denudation of the human spirit and the transofrmation of human beings into mere kindling for the pyres, ambitions and nightmares of clashing ideologies and the petty little grey men in suits that pulled the levers of power and pushed the buttons of war.

The individual had never become so meaningless, trapped between the bombs and the beauracrats, mere fodder for the machine to feast on.

Joy Division reflected this in their music, how this world had become a concentration camp for the soul, a place where few birds sang and the trains ran along tracks that started when you left school and finished when you retired and died.

The film charts how Joy Division's rise to fame was accompanied by the collapse in the private life of Ian Curtis. The more the crowd wanted, the more he had to give to everyone around him until finally there was only the void where he once had been.

It shows the how the young singer Ian Curtis finds fame and then realises that in order to enjoy it he has to destroy himself.

Just like Kurt Cobain and Richey Edwards, their joy was in the music, those sacred times when they simply connected with their muse and the music flowed through them.

Moments of truth and clarity amidst the responsibilities, lies, illusions and deceits that come with fame and wealth.

The film is a very moving exploration of the descent of Ian Curtis into his own personal darkness, a place where he no longer had any control.

The performances are superb and the actors who play Ian Curtis, Tony Wilson and Bernard Sumner are all superb in their roles.

The scene where Ian has an epileptic fit on stage is an brilliant peice of acting and cinematography.

It is one of the best bio-pics of a British rock star I have seen so far.

I look forward to bio-pics one day of Phil Lynnot and Nick Drake, the rocker and the poet, both who were musical geniuses with lives that demand telling.
Posted by Defender of Liberty at 07:20