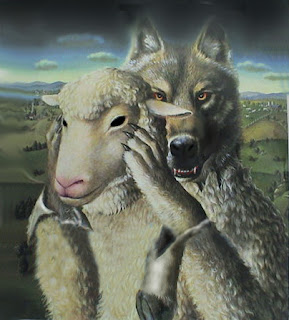 The Northern Rock scandal has revealed that Britain is afflicted by the New Socialism, and this is the Bolshevism of the Banks.

Banks such as Northern Rock are in a unique position, they privatise their profits and socialise their losses.

This is part of the trend that began with the Fabians. Their motto and symbol was a wolf in sheeps clothing.

Socialism through the free market was the creedo of the Fabian movement and they have triumphed.

Today we have worst of all possible worlds - we have Political Correctness in the Public Sphere and Consumerism in the Private Sphere.

The profits of the corporations are taxed and used to subsidise the Servile State and its army of socialist politically correct minions all of whom depend upon the Labour Party for their fake jobs.

Individualism and liberty is under attack from all sides.

Consumerism seeks to replace individualism with Commodity Fetishism and turn us all into the tribes of Reebok, Armani and Gap whilst Political Correctness passes ever more laws that restrict free speech and creates Thought Crimes and Hate Laws to restrict democratic debate and deny us our ancestral liberties.

We have in fact created the ultimate fascist society, where the avdertising agencies pump out the creedo 'BELIEVE, OBEY, BUY' and the Hitler Jugend of Consumerism all wear their uniforms of trainers, tracksuits and baseball caps.

Even those who are rebel are manufactured ciphers. Revolution itself has become an aspect of consumerism.

If you want to be a rebel then you have to become a Goth, a Hippie or a Punk - each of which are cults dominated by an image and corporate commidity supply base that peddles their rebellion/conformity to them.

You want a leather jacket with Anti-Nowhere League written on it then visit a punk shop.

You want a Sid Vicious poster then go to Camden Market.

You want to buy a pair of leather goth boots with spikes and buckles then go to your local town centre.

Conformity and Rebellion are both different sides of the same coin, and the same people profit from both.

I remember when I used to go to the Glastonbury Festival and noticed whilst wading knee deep through the mud that all the stalls all sold the exact same things and that all the hippies were wearing the same uniform.

Consumerism conquered Glastonbury and the Hippies all sold out.

This process began in the Sixties with the Hippies who said that in order for us to be happy we must do as we wish, and that all social bond and conventions must be rejected if we are to be free.

This was the birth of the Selfish Society - not Thatcherism as the left like to claim.

The New Socialism is where the State and the Corporations each profit mutually from each other.

Only by rejecting Consumerism and fighting Political Correctness and voting into power the BNP who will replace Globalism with Nationalism can we reclaim our liberty and our National Destiny.
Posted by Defender of Liberty at 03:38

lee currently the BNP are using its main publicity assetts rather well - the internet and leaflets.

do you see a place for marches and protests where we call on all members?

i suppose the obvious extreme would be if the EU or the goverment EU puppets try to shut us down.

can you think of any other positives for this resource?

the EU stealing our powers could be one - remember the majority of the public are against the treaty/constitution but feel powerless.

now should the BNP arrange a rally of 5,000 expected members and many more in supporters, wouldnt this gain us massive publicity and public admiration, that the BNP are the only valid alternative to this mess?

i believe so an i believe we should march on this issue - its too important to miss and i believe we would double our support overnight!

what do you say Lee?

The problem with marches is that they can be hijacked by idiots and infiltrators and at the same time they allow the opposition to organise against us. Then when the reds attack the march the media can accuse us of being violent and portray us at the aggressors instead of the victims.

Marches unforunately are not the way forward - community politics and building up community support bases from the ground level up in our communities is the answer.

thanks for the reply,

i agree on the whole with what you say in a general enviroment but there has to be a point when the goverment has gone TOO far?
when we are left with little alternative.

for example giving all power to the EU, or trying to ban the BNP,
or close down websites.

we cannot run from positive action forever in fear of some small level highjacking of the event.

the mainstreme already hang us at every opportunity so i suggest you cant paint black any blacker.

in fact with good organisation we could prove how orderly we are and how we can expose the left, our website is a popular medium that would be an outlet to tear down any media lies.

we will state that any BNP based
disorder will be met with expulsion and that this is a peaceful march on banners, showing at least that we are not inciting any violence.

this is an age where we all have cameras and video footage and we are aware of the majority of trouble makers and we could monitor them, inform the police of them.

also if we could show theoulic the support of 5-10,000 BNP supporters they would feel that we are a popular viable alternative and not just a party that scurries about in the shadows.

but we need to march on a popular issue such as the surender of our powers to Europe, as if there are any misshaps the public would still side with our cause.

we cannot hide forever - its self perpetuating.