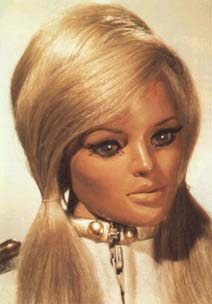 JACQUI SMITH, the home secretary (pictured above) and arch enemy of THE MYSTERONS (who are not Muslims), has admitted she would feel unsafe walking the streets of London late at night.

In an interview with The Sunday Times, she said she would not feel comfortable out alone after dark in deprived areas such as Hackney or even affluent ones like Kensington or Chelsea. She claimed streets at night were safer after 10 years of Labour in power but opposition politicians said her comments exposed the failure of the government’s policies on crime.


In the interview, Smith, the first woman home secretary, was asked whether she would feel safe walking on her own around Hackney at midnight. She replied: “Well, no, but I don’t think I’d ever have done. You know, I would never have done that, at any point during my life.” Asked why not, she answered: “Well, I just don’t think that’s a thing that people do, is it, really?”

" In real life all women in Britain go straight to bed after dark or if they are outside after dark then they are either hookers, sorry sex workers, or hoodies. "

It was pointed out that some people, such as shift workers and sex workers (the new name for prostitutes), had no choice.

She replied " That may be true but doesnt everyone go to sleep when it gets dark. My cat does and so does my parrot. The MYSTERONS dont though, they have ten eyes that can see in the dark and five legs that allow them to run as fast as a cheetah and machine guns instead of fingers that fire laser beams. They are not Muslims though. "

She was also asked whether she would feel unsafe walking around an area such as Kensington and Chelsea. “Well, I wouldn’t walk around at midnight and I’m fortunate that I don’t have to do that,” she replied " I live in an Ivory Tower surrounded by fat coppers with machine guns and therefore I am as out of tough with reality as Michael Jackson is in Neverland. Thats why I make such a good politician, because the real world is not something I know a lot about. I know about the MYSTERONS though, and those evil alien terrorist bastards have to be crushed before they take over the world, though they are not Muslims remember. "

Smith, who is protected by police bodyguards, said she had walked around Redditch, her Worcestershire constituency which is very like Peckham but without the drug dealers, gangsters and drive by shootings, though Redditch does have a young man with offensive zits who roams the streets and scares the non-Zitty population a lot.

“I don’t get the opportunity to walk around on my own now but I certainly have done in the recent past, on my own. I even one went to the shops once on my own and went into Poundland, which is a shop that sells everything for fifty pence. This proves I am just like you poor scruffy working class types who vote for me as I visit shops like Poundland too. ”

After the interview, a worried aide called The Sunday Times saying the wording had not come out as the home secretary had intended. She said Smith had recently “bought a kebab in Peckham. Jacqui was waiting outside the kebab shop in a tank whilst an Apache helicopter hovered overhead machine gunning any locals that got near the shop ”.

(for members of the press / government / police reading this I have copyrighted the words THE MYSTERONS to describe the non-Muslim Islamist terrorists who are not motived by Islam/ Islamism. Therefore if any overpaid fifthwit in the Home Office uses my copyrighted phrase to describe Al Qaeda / THE MYSTERONS then I will sue your ass ).
Posted by Defender of Liberty at 05:35


Meanwhile apartheid is alive and well in London. Bet this never went up in the jobcentre?