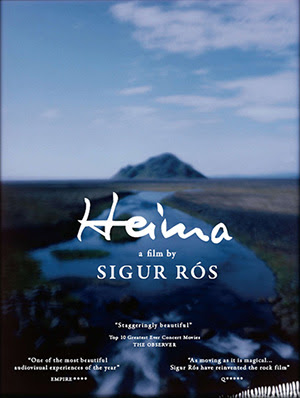 Music rarely has the power to astonish, to awaken within ones self the precious numinous sensation of being in the presence of something that is simply pure beauty.

The music of Sigur Ros has that just elemental power.

The band Sigur Ros derive from Iceland, and their music is elemental in its evocation of the spirit of Iceland itself.

But the roots of this music can be traced far further back than that, because this music communicates to a scared place within ourselves, and its roots can be traced back the homeland of the Northern soul and spirit.

This is music of the blood, as it communicates without words via emotions. The singer sings in an articifial language which cannot ever be translated, and so the images it creates within ourselves and our individual emotional responses to the music are evoked purely by ourselves.

We live in a modern media saturated society based on conditioning where the advertising industry use music as a mechanism to directly influence behaviour. Therefore most music has a message, either from its creator or from its pimp.

This music though is simply truth for it derives from a place of awesome power, a land where fire and ice fight, where the land where sky and ocean merge and it is to this place that the music lifts and takes you.

The recent DVD release of the musical odyssey that is Heima, is like the rupturing of rock and the gushing forth of a quicksilver stream of clear water.

Not since Mozart, Beethoven or Wagner has a music been created that directly reflects the Higher European Spiritual Soul. This music is a unique musical form, specific to the European folk soul.

Just as each race, nation, people, culture and tribe have their own unique musical forms that reflect and connect themselves to their history and Homeland, then this music is a direct spiritual connection to their ancestral homeland of Iceland and also to the folk soul of the European peoples.

The DVD is a journey around Iceland set to the music of the band, so that along with the music you have the images of Iceland and the band in performance.

This is music of the European folk soul, the lark song of a new dawn, the songs of a new spiritual awakening.

For over fifty years the musical forms of Europe have been reflective of contemporary culture or sought to create new political forms.

Sigur Ros are instead creating a new emotional language, a new form of communication, a Pan-Europan lexicon of music that speaks to the individual directly without any words.

When you watch this film and listen to this music, the landscape you see in the film you understand is sacred.

This is the true magic of Sigur Ros, to allow oneself to re-connect with nature and with ones own homeland.

Sigur Ros music makes you want to go for a walk with the I Pod on, to haunt the misted shorelines at dawn and walk through storms just to watch the lighning flash.

It gives back perspective for it awakens ourselves to the immensity of the music and the world around us.

http://www.youtube.com/watch?v=RZYIfUdIyfs
Posted by Defender of Liberty at 10:47

lee John,
This music is totally amazing!
And there is evem more on U-tube

I spent 2 weeks in Iceland at the end of august last year with my husband, We had both for many years wanted to go there.

It was totally inspiring, the people wonderful,and the scenery breathtaking. There is virtually no crime, in fact I could 'wax lyrical' for ever about it!
Also, there are many folk of my Ancestral faith of Ásatrú.
It was magical!
May it remain untainted by what is happening to the rest of Europe!

I listened to all three clips and they seem to be coming from a similar place to Coldplay or Radiohead.

Get this Mr/Ms "sensitive" muso, I DON'T CARE ABOUT YOUR POOR WIDDLE FEEEWINGS AND HOW DEEP THEY RUN!

They may be anti-fascists who masquerade as fascists, but give me the muscular ear pounding of Laibach any day.

Hey nick naime,
I like Tanz Mit Laibac as well, Impressive! I' m going to put that vid on one of my other blogs,
Cheers