New Labour to Disestablish the Church 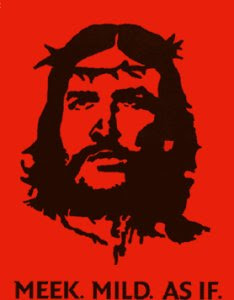 Image - The Red Christ - actual official poster comparing Christ to the communist murderer Che Guevara issued by the Church of England to raise attendance at churches in the UK.

New Labour To Disestablish the Church of England.


For a sign of the Labour governments future intentions towards the Church of England the announcement that the ancient Blasphemy laws that explictly protect the Church of England, are to be scrapped should alarm all Anglicans, monarchists and British constitutionalists.

Religious Relativism is another manifestation of political correctness in that the very concept of an established church in Britain is an affront to multi-cultural diversity. In order to appease the Islamists and the secularists, the Church of England must be disestablished. An established church is like an established culture, people, nation or traditional way of life. Each of those established institutions are irreconcilable with the very notion of diversity and relativism at the heart of multi-culturalism. In order to ensure that all other religions in Britain feel at home here, we must have our institutions, culture, traditions and national way of life destroyed.

The fact that religious hatred laws are already in existence that protect all religions in Britain, but the blasphemy laws only protect the Church of England, means that the intention of this legislative change is to downgrade the status of the church as to just another religion in Britain. This is therefore a direct attack on the British Constitution and the Church of England itself.

Britain is a protestant nation as enshrined in the British Constitution. Other religions have all the same rights as Anglicans, but the Church of England is unique in that is one of the legal and political foundations of the British Constitution itself. The New Labour Revolution has been characterised by the systematic undermining of the British Constitution and the perpetual surrender of our national sovereignity to supra-national institutions. Britain has become just another extension of the supra-national globalist corporate fascist state which is controlled by the EU, UN, US and the global corporations. In order to ensure that this process cannot be reversed then all bastions and institutions of tradition within Britain must be destroyed.

The Church of England has to be disestablished and religious relativism join the ranks of cultural and moral relativism in the tool box of political correctness. On the 1st December 2003 the Archbishop Rowan Williams gave a broadcast which revealed a man ill at ease with the establishment of the Church of England. "It's possible to have very fruitful, very constructive relations with government and public life without all the apparatus of legal establishment as it's evolved in England," he said.

So do not expect any criticism of this constitutional vandalism and betrayal of our culture and history from the one person tasked with protecting the Church. Archbishop Rowan Williams is simply a marxist in a dog collar, a man more interested in gay rights, immigrants and inter faith dialogue than in standing up for the Church of England.

The death of a thousands cuts is how the process of our national destruction has been undertaken, and this is yet another attack on us and our country by a government that no longer represents the people that voted it into power and who it is supposed to be serving.
Posted by Defender of Liberty at 11:30

Excellent article. And the poster of Christ is poignant, even if it were used to attract socialist Bolsheviks, and other miscegenated minds to the Gospel.

But that's half the problem isn't it? What the C of E speaks today is NOT the Gospel of St. Bede, the Celtic Church, or even Cranmer at his most Continental Reformer- it is the Religion of Multiculturalism.

A heresy. One that did not even exist before Darwin's time, and took over 150 years to inculcate itself in the British psyche. The older concensus was that Christianity was a decidedly European event- Belloc's famous "Europe is the Faith, the Faith, Europe." And that includes the stand-offish almost-protestant C of E!

I have spoken of this unclear stance of 'Who is the Israel of God?' at my blog: www.thewhitechrist.wordpress.com.

IF Anglicans would once again embrace the very clear racial superiority they once held, when they were known as 'stupor mundi,' you lot in the Mother Country wouldn't have to have Arab and African bishops tell us all what should be common sense, to any Caucasian, world-wide.

Keep up the good work. Love your blog.