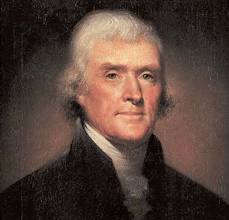 Another Great Letter From Thomas Jefferson
11-7-10


I hope we shall take warning from the example and crush in its birth the aristocracy of our monied corporations which dare already to challenge our government to a trial of strength and bid defiance to the laws of our country. - Thomas Jefferson


Here is the entire Jefferson letter...

"I received your favor of Oct. 16, at this place, where I pass much of my time, very distant from Monticello. I am quite astonished at the idea which seems to have got abroad; that I propose publishing something on the subject of religion, and this is said to have arisen from a letter of mine to my friend Charles Thompson, in which certainly there is no trace of such an idea.

When we see religion split into so many thousands of sects, and I may say Christianity itself divided into its thousands also, who are disputing, anathematizing and where the laws permit burning and torturing one another for abstractions which no one of them understand, and which are indeed beyond the comprehension of the human mind, into which of the chambers of this Bedlam would a [torn] man wish to thrust himself. The sum of all religion as expressed by it's best preacher, "fear god and love thy neighbor" contains no mystery, needs no explanation. But this wont do.

It gives no scope to make dupes; priests could not live by it. Your idea of the moral obligations of governments are perfectly correct. The man who is dishonest as a statesman would be a dishonest man in any station. It is strangely absurd to suppose that a million of human beings collected together are not under the same moral laws which bind each of them separately. It is a great consolation to me that our government, as it cherishes most it's duties to its own citizens, so is it the most exact in it's moral conduct towards other nations.

I do not believe that in the four administrations which have taken place, there has been a single instance of departure from good faith towards other nations. We may sometimes have mistaken our rights, or made an erroneous estimate of the actions of others, but no voluntary wrong can be imputed to us.


In this respect England exhibits the most remarkable phenomenon in the universe in the contrast between the profligacy of its government and the probity of its citizens. And accordingly it is now exhibiting an example of the truth of the maxim that virtue & interest are inseparable. It ends, as might have been expected, in the ruin of its people, but this ruin will fall heaviest, as it ought to fall on that hereditary aristocracy which has for generations been preparing the catastrophe.

I hope we shall take warning from the example and crush in its birth the aristocracy of our monied corporations which dare already to challenge our government to a trial of strength and bid defiance to the laws of our country.


Present me respectfully to Mrs. Logan and accept yourself my friendly and respectful salutations."

Posted by Defender of Liberty at 10:40

Where oh where are the Jefferson's of today?

This is an email I sent to a local Council Officer because I thought he would appreciate an inspiring speech of the right of freedom of expression and free speech.

They are now seeking an injunction against me to stop me communicating with them and have blackmailed just prior that it will stop a planning proposal !!


Here is his reply, scandoulous or what !!-


Mr. Rogers,
I understand that you have been attempting to contact me today, I have however been unavailable. I would nonetheless advise you that as a result of recent unacceptable/inappropriate e-mails etc. the issue of your contact with officers of the Council is being once again considered. As such until the situation, in this regard, is clarified it would be advisable to refrain from direct contact with council officers.

It is sickening mind Lee isnt it.

What a fkn joke, I send him a video on free speech because I genuinly thought he would enjoy it and then he threatens me with an injunction to shut me up.
21st Communist briton, dont it make you want to puke ?!

Did you watch that speech above mate, it is awesome and also have you listened to Ayn Rand, she is incredible .