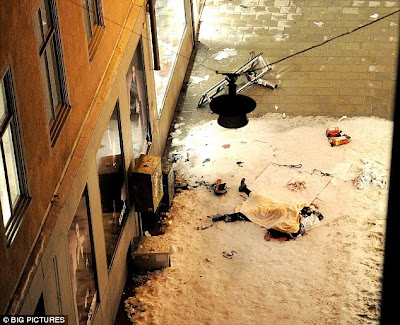 Is this why Allah created our universe,
And built blue Earth in empty space,
Then set a red sun to bring forth life,
And a moon to shine with light at night ?

And did his Prophet rightfully declaim,
That men must kill in his great name ?
And is this your promise for our future,
More centuries of holy war and carnage ?

And is this the fruit of your true faith,
Love perverted and turned into hate ?
A body in the gutter of a High Street,
With a bag of nails at his bloody feet ?

And do your killers stained with cold blood,
Awake from death to the virgins blush ?
If so you are nought but a madmans vision,
That brings forth hell in the name of heaven.

Posted by Defender of Liberty at 10:15

According to Gordon Duff (Israel, Spying, US Security, Wikileaks and Julian Assange.):

Wikileaks' leaks "were carefully edited, thousands of reports were reconstructed and falsified and hundreds of thousands were removed as inconsistent with an unknown political agenda.

"It requires, in fact, a broad spy operation inside the Pentagon that enjoys its ability to operate with impunity.

"Hundreds of Israeli citizens work in the Pentagon.

"None of this should be a surprise to anyone."

You know I'm not one for poetry Lee but this is excellent, thank you.

Can you believe the fucking arrogance of these Evil Genocidal Cunts.