Nigger and the Liberal Idiots 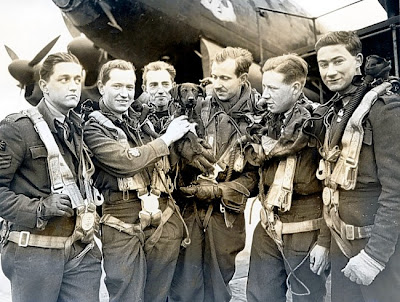 Image - Nigger and the Dam Busters.


Why not have American pilots in the Dambusters ?

Why not have Darth Vader lead the Nazis ?

Why not have Bruce Willis in his string vest blow up the dam with dynamite ?

Why not re-write the entire fucking history of humanity so a tiny cult of politically correct assholes arent offended by anything they do not like ?

So much for historical accuracy.

Who the fuck do these liberals think they are, re-writing history to suit their own PC liberal agendas.


The Dam Busters dog N****r will be renamed Digger for a modern remake of the iconic film to avoid offending American viewers, it has emerged.

In the original 1955 film Gibson's dog's name was spoken 12 times as a code word to report successful dam breaches to RAF Bomber Command.

Offensive: Actor Richard Todd as Wing Commander Guy Gibson and his dog N*gger in the classic film, The Dam Busters
But Fry, who is writing the script for the long-awaited remake, has revealed he will now be renamed Digger to avoid offending American viewers.

He said: 'There is no question in America that you could ever have a dog called the N-word.

'It's no good saying that it is the Latin word for black or that it didn't have the meaning that it does now - you just can't go back, which is unfortunate.

'You can go to RAF Scampton and see the dog's grave and there he is with his name, and it's an important part of the film.

'The name of the dog was a code word to show that the dam had been successfully breached.

'You just can't go back': Stephen Fry, left, is writing the script for the remake of The Dam Busters, which Peter Jackson, right, will direct

'But obviously that's not going to happen now. So Digger seems okay, I reckon.'

The iconic 1955 film tells the story of British World War Two scientists who developed a bouncing bomb as a means of attacking Germany's dams.

During the film a special squadron of Lancaster bombers, 617 Squadron, is formed and trained by Wing Commander Guy Gibson.

His black Labrador dog N*gger is present throughout the film and his name repeatedly used as a code word to report successful breaches of dams.

But when Peter Jackson began planning a remake of the historic film, which has been scripted by Fry, the team agreed to rename him Digger.

N*gger died in a car accident on the morning of the Dam Busters raid on 16 May 1943 and is buried at the squadron's home of RAF Scampton, Lincs.

The move has attracted criticism from historians and aviation enthusiasts who have revealed they are 'unhappy' with the alteration.

He said: 'It's not a problem with coloured people it's the people in power creating the problem. Sod their political correctness and sod human rights.

'They should keep the dog's name the same - it's ridiculous that they are trying to rewrite history. His grave is still here with his name on it.

'We have over 9,000 visitors a year at RAF Scampton and many of them are not native to England but none of them are offended.

'N*gger is the name of the dog and that shouldn't be interfered with. In the context of the time and the film it's not a racist name.'

Jim Shortland, a historian who specialises in the Dam Busters, added: 'I'm unhappy with the change because it's sacrificing historical accuracy for political correctness, in particular for the American market.

'If someone was offended by Guy Gibson's name you wouldn't go around calling him Richard Todd.

'One wonders what else the film might get wrong. Once you know something is incorrect, you're going to be suspicious.'

But Phil Bonner, spokesman for Aviation Heritage Lincolnshire, admitted the name of the dog is 'very emotive'.

He said: 'The name of the dog is very emotive for many people and in some respects it's a reflection of the changes that have happened across the generations.

'The whole core of the film is about the bravery of the people who flew from Lincolnshire on a very daring raid and it's important that this aspect of the film is not watered down.'

Posted by Defender of Liberty at 03:44

Guy Gibson- sounds too much like Gay Gibson! lets change his name to. Perhaps, Achmed Gibson might appease the idiots that promote cultural marxism. Bastards!!

The marxist censors are psychopaths!