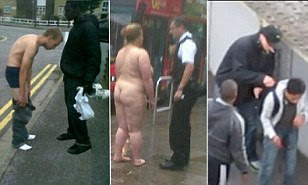 Image - people mugged, stripped, beaten and robbed during the riots.


It is obious now that the riots are a manifestion of a cultural malaise in our society.

They transcend class and race - and also Left and Right politically.

The rioters are motivated by a mixture of Thatcherite 'There is no such thing as society' and Tory materialistic ethos of 'Gimme the money - Fuck You', combined with Blairite New Labour socialist 'Culture of Entitlement' Grievances culture of apathy and greed.

They are united only by one thing - their feral amoral culture.

The Cultural Marxists infiltrated both Left & Right of British Politics and merged with Capitalism to create Fabianism.

Cultural Marxism via Fabianism infiltrated and subverted every institution in our nations - from church, media, economic, schools, politics etc etc.

It has inculcated into youth an utter disrespect for society and other people at the same time as a materialistic greed for goods and commodities that they want, but are not prepared to work for.

They are the worst of all - greedy and apathetic.

They would rather steal than work for something.

Raised without fathers, single mothers unable to control them, with no cane in schools and no birch for thuggery and sent after conviction ( if they are caught ) into liberal prison regimes and no death penalty as the ultimate detterent = social chaos.

The lack of discipline in society has allowed anarchy to be created.

The Feral Class, or The Harry Brown Generation as I think they should be known in homage to the film that reveals the nature of the Feral Class, are psychopathic and nihilistic.

Respect must be beaten into them.

If they cannot behave - then they must be caned or biched.

Discpline must be imposed upon the lawless.

Posted by Defender of Liberty at 11:58

Very true, Lee. You sum it up better than Coulter in that the catalyst for much of the immoral behaviour is consumerism for its own sake. Both displayed by rich or the relative poor.

Ah, now that the liberal elite had to hide in their ivory towers as the rioters burnt down their homes, beat them, robbed, mugged and god knows what else they have finally woken, wiping their blurry smoke stained eyes.....welcome to the 21st century liberals, this is your culture you have created, shit isn't it?