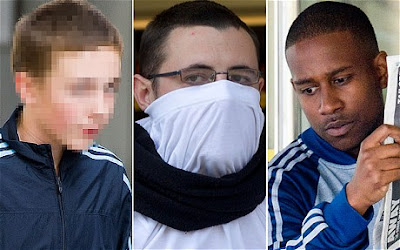 All the people in the above image are black says Nick Griffin.


The riots according to the genius that leads the BNP are 'black riots'.

The majority of white people arrested in the rioting and looting across the country are not white, in fact they are albino black people says Nick Griffin.

Welcome to the BNP - a party led by a man so stupid it hurts to think about it.

Posted by Defender of Liberty at 01:06

Maybe I am missing your point, but if there are only 10% of enrichers in the UK, then we should have only seen 10% of them looting our streets.

Being a fan of your political angle I followed your twitter account the night before last and it seemed like a running battle with Nick rather than the promotion of the BFP.

To me, it was quite obvious that 90% of the looters were ethnic and they were burning down buildings that have been stood longer than they can trace their roots in our country.

How do you know the “majority of white people arrested in the rioting and looting across the country”? Do you have access to the police data base? You put up some pictures, notably not showing any rioting and make this claim. You choose a couple of court cases, yet the courts and police are notorious in hiding the immigrant crimes. Why do you think these particular “criminals” were chosen to be put on TV?

You just want to attack whites. That is all you ever do on this blog.

The riots started when a bunch of blacks paraded around about the cops shooting a black, nevermind that the cops shot 7 White men, when the "protest" became violent and all sorts of miscreants came about, exploiting the riot to loot everything. Whiteness comes with a code of behavior. Those that act like monkeys will be regarded as much.

Too many people in this country have no respect for this nations, its people, traditions, heritage and culture.
and that's just our treasonous politicians.

Alex Jones on the Riots

Go on Lee, stab whitey in the back why dont you!

I'm not being funny mate, but I think you going left is like hoping a dog will meow, its fkn weird !

Not just will it isolate you from your followers, but its just too fkn much to get my head around, especially after the Bank raped me last week :-#/

Get back to the program comrade, you are a full blooded Nationalist ;o).

The problem with Nationalists is that they are unable to think new thoughts, as they are locked in to their own heads.

They see what they want to see.

Griffin lied about the riots - they were not about race but culture.

Thats fucking obvious now to anyone with a brain.

Now some people may be in denial about the fact that it is true, but they better get used to it.

Wishing it wasnt is no longer an issue.

People will laugh at you.

Natinalists need to escape their own self imposed 'race box' and stop taking Griffins bullshit seriously.

There is no doubt that you have it correct, but full on cultural Nationalism will be a very long time coming.
Somethings are better given in small much smaller doses and some things are better kept to ourselves.
Much sooner will come the racial and cultural/Religious War that will be unstoppable than a permanent cultural shift.

Think of me what you wish, I prefer my own, warts an all; even pathetic sycophants-

Its a democracy mate.