The West is the Problem 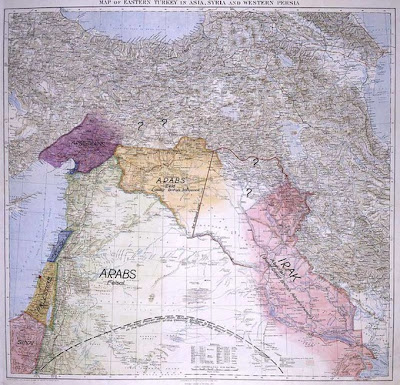 The problem of the Middle East and Libya is the West.

The nations of the Middle East are products of the imperial powers after WW2.

So is Libya, a product of Italian Imperialism.

The problems we have today in the Middle East are hangovers from that era.

The oil war in Libya will desend into either anarhy, chaos and murder or NATO will ocupy the land to ensure the oil companies get the Libyan oil.

Either way we will have to pay for it all.

One of the most popular books among American military officers serving in Iraq is Seven Pillars of Wisdom — the accounts of T. E. Lawrence, the British colonel who rallied Arab tribal leaders during World War I. Lawrence wrote about unconventional warfare and the people of the region.

A new exhibition at London's Imperial War Museum features a long-lost map of the Middle East drafted by Lawrence and presented to the British cabinet in 1918. It provides an alternative to present-day borders in the region, taking into account local Arab sensibilities rather than the European colonial considerations that were dominant at the time.

For historians, Lawrence's map is an exercise in what ifs: He included a separate state for the Kurds, similar to that demanded by Iraq's Kurds today. Lawrence groups together the people in present-day Syria, Jordan and parts of Saudi Arabia into another state based on tribal patterns and commercial routes.

The map also envisions a separate state called Palestine — Lawrence knew the British were considering the creation of a homeland for the Jews.

And he saw no reason to separate Iraq's Sunnis and the Shiites — an issue that continues to divide that country today.

Posted by Defender of Liberty at 02:01