The Femi-Nazis and Their Support For Child Rape 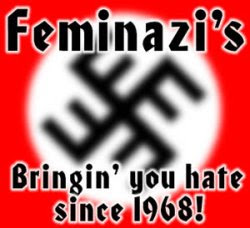 I was going to post this on the comments section of the BNP site but it was too long, so I post it here instead.

Let me start by saying I am a supporter of free speech, and that though I disagree with Nick Ericksens views that I follow the principle stated by Charles BRADLAUGH the British social reformer (1833-1891) "Without free speech no search for truth is possible... no discovery of truth is useful... Better a thousandfold abuse of free speech than denial of free speech. The abuse dies in a day, but the denial slays the life of the people, and entombs the hope of the race."

I am also a supporter of Voltaires dictum ; I may disagree with what you have to say, but I shall defend, to the death, your right to say it." Francois Marie Arouet VOLTAIRE, The Friends of Voltaire, 1907, French philosopher and writer (1694-1778)

Nicks comments on his blog in 2005 were just that, they were comments. They were not policy and were nothing to do with the BNP. The fact that the Jewish Chronicle, a racist organisation, decided to 'save' these comments up before deploying them to try and damage the BNP's chances in an election is a sign of utmost cynical manipulation of the public by the JC.

If it really was 'concerned' by these comments why wait until now to release them - the answer is simply cynical electioneering by a newspaper who have decided to subvert our democratic politicial system and attack a party that stands against the Labour Party and the Labour Friends of Israel.

Unlike the media such as the Jewish Chronicle, the Daily Mail and the London Standard Nick Ericksens views have no power to influence peoples minds or define the nature of societ, only the media can do that. The utter rubbish, lies and pure nonsense pumped out by the British media, such as we saw with the recent scandal about the lies being told about McCann family, means they are in no position to moralise to the British people. The media are parasites and pimps and nothing more.

Unlike the radical Feminists like Marilyn French who wrote' All men are rapists and that's all they are. They rape us with their eyes, their laws, and their codes', Nick Ericksen is not worshipped as an icon by members of the Labour government, the media and the Establishment.

Below are the quotes from the so called 'feminists' in British society. Nicks comments may have been crass and stupid, but they are protected as a fundamental part of our right to free speech. As the case of Handyside V the UK states ;

" The Court's supervisory functions oblige it to pay the utmost attention to the principles characterising a "democratic society". Freedom of expression constitutes one of the essential foundations of such a society, one of the basic conditions for its progress and for the development of every man. Subject to paragraph 2 of Article 10 (art. 10-2), it is applicable not only to "information" or "ideas"
that are favourably received or regarded as inoffensive or as a matter of indifference, but also to those that offend, shock or disturb the State or any sector of the population. Such are the demands of that pluralism, tolerance and broadmindedness without which there is no
"democratic society".

At the moment we have Ken Livingstone, an apologist of IRA-Nazism and Islamo-Fascism, running London and Boris Johnson probably going to win the job.

As a former member of the Bullingdon club
http://en.wikipedia.org/wiki/Bullingdon_Club with David Cameron, a group of rich tossers who got drunk at university and smashed pubs up before throwing money at shocked bar staff he once said, "I'm backing David Cameron's campaign out of pure, cynical self-interest."


Here are some of Boris's other classic gaffes ;


Let us not listen to what the vipers and snakes of the media hiss in their papers, they are paid too lie and pimp out the political parties their corporate owners support.

Below are some of the real comments about the femi-nazis that need to be understood.

These are people teaching in our schools whose followers influence government and media and whose poison is being injected into young minds at universities and colleges as you read this.

Please pay particular attention to the professional position of the individuals below, many of whom run colleges, magazines, or work in government:

"Men who are unjustly accused of rape can sometimes gain from the experience." (Catherine Comin, Vassar College. Assistant Dean of Students).

"All sex, even consensual sex between a married couple, is an act of violence perpetrated against a woman." .... "You grow up with your father holding you down and covering your mouth so another man can make a horrible searing pain between your legs." (Catherine MacKinnon - Prominent feminist scholar at the University of Michigan and Yale)

"I believe that women have a capacity for understanding and compassion which man structurally does not have, does not have it because he cannot have it. He's just incapable of it." (Former Congresswoman Barbara Jordan)

"I want to see a man beaten to a bloody pulp with a high-heel shoved in his mouth, like an apple in the mouth of a pig"....."Under patriarchy, every woman's son is her potential betrayer and also the inevitable rapist or exploiter of another woman." ...."for a woman, the home is the most dangerous place in the world!" .... "The traditional flowers of courtship are the traditional flowers of the grave, delivered to the victim before the kill. The cadaver is dressed up and made up and laid down and ritually violated and consecrated to an eternity of being used." .... "Heterosexual intercourse is the pure, formalized expression of contempt for women's bodies." (Andrea Dworkin).

"Probably the only place where a man can feel really secure is in a maximum security prison, except for the imminent threat of release." (Germaine Greer)


"All men are rapists and that's all they are." (Marilyn French, Author; and advisor to Al Gore's Presidential Campaign)

"I feel that 'man-hating' is an honorable and viable political act, that the oppressed have a right to class-hatred against the class that is oppressing them." (Robin Morgan, Ms. Magazine Editor)


" "We can't destroy the inequities between men and women until we destroy marriage." -from Sisterhood Is Powerful, Robin Morgan (ed), 1970, p.537.

"Since marriage constitutes slavery for women, it is clear that the women's movement must concentrate on attacking this institution. Freedom for women cannot be won without the abolition of marriage" (Sheila Cronan, 1988 Houston National Organization for Women {NOW} Conference for Women.).

"We are, as a sex, infinitely superior to men..." Elizabeth Cady Stanton, "One Woman, One Vote", Wheeler, p.58

"The most merciful thing a large family can do to one of its infant members is to kill it." (Margaret Sanger, founder of Planned Parenthood, in "Women and the New Rage," p.67.)

"Since marriage constitutes slavery for women, it is clear that the women's movement must concentrate on attacking this institution. Freedom for women cannot be won without the abolition of marriage." (Radical feminist leader Sheila Cronan)

"Being a housewife is an illegitimate profession... The choice to serve and be protected and plan towards being a family-maker is a choice that shouldn't be. The heart of radical feminism is to change that." (Vivian Gornick, feminist author, University of Illinois, "The Daily Illini," April 25, 1981.


"In order to raise children with equality, we must take them away from families and communally raise them." (Dr. Mary Jo Bane, assistant professor of education at Wellesley College and associate director of the school's Center for Research on Woman)

"The end of the institution of marriage is a necessary condition for the liberation of women. Therefore it is important for us to encourage women to leave their husbands and not to live individually with men... All of history must be re-written in terms of oppression of women. We must go back to ancient female religions like witchcraft." ("The Declaration of Feminism," November 1971).


"By the year 2000 we will, I hope, raise our children to believe in human potential, not God." (Gloria Steinhem, former editor of 'MS' magazine.)


"The simple fact is that every woman must be willing to be identified as a lesbian to be fully feminist."
( Sheila Cronan, National NOW Times, Jan.1988)

ANALYSIS OF THE PREVIOUS QUOTE: This sentence reveals that N.O.W.'s internal goal was to convert as many women as possible to lesbianism; the ostensible external political goal being to form the large-enough base of victim-class activists needed create female-female "super-family" marriage.

It also publicly admits that N.O.W.'s political goal was not to help those who are (by genetic or other substantial predilection) lesbians, but to force as many women as possible to become lesbians (or to pretend they are lesbians), or face exclusion from the feminist movement. It also admits that the dominant feminist organization no longer sought equal rights for women, but instead was pursuing an agenda that despises heterosexuality and is anti-family, antisocial, misandric, and secessionist in nature.


How Femi-Nazis Support Paedophilia and Rape.

In the award-winning radical feminist play by Eve Ensler entitled The Vagina Monologues, a 24-year-old woman plies a 13-year-old girl with alcohol, then sexually seduces her. By statute and by feminist definition, this "seduction" is rape.

Apparently, the reference to "good rape" has been deleted from some performances but the surrounding language makes the rape’s goodness clear. For example, the little girl eulogizes her orgasm:

"She gently and slowly lays me out on the bed..." She gratefully concludes, "I’ll never need to rely on a man."

The above is the child rape that feminists support, for the rape creates a feminist.

The Vagina monologues have been on the BBC, the West End and toured around the country, it is an agenda for female rapists.

Femi-Nazis are sick but they are in the mainstream of our society and academia.

They must be exposed and removed from their positions.
Posted by Defender of Liberty at 00:41