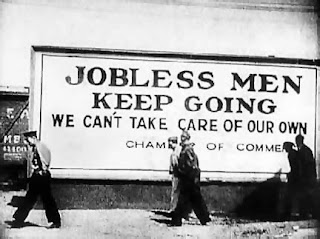 For a long time I have been stating that the era where cheap mortgages were given to people that were between 6-9 times their salaries was in order to support the Labour Party and its policy of mass immigration ;

1) It allowed the White Working Class to be controlled by ensuring they had the illusion of being able to own their homes, when in reality it was the banks that own your home until you pay off the mortgage

All the above 1,2,3 haves been revealed to be false.

We are about to witness an era of mass evictions, homelessness and poverty unseen since the 1930's in America.

Millions of households are about to lose their homes and wen they do they wont be able to go to their council and ask for a house because they are homeless - as they are filled up by asylum seekers and immigrants.

The government can either pay billions of pounds to the banks from the public purse, in other words subsidise the big banks and incompetent and greedy bankers with our taxes, or they can sit back and watch as millions of British people see their houses taken from them.

Either way - house prices are going to fall by a third so millions of people will be in a negative equity trap at the same time as the credit crunch is going to stop people buying homes as the banks refuse to lend to new mortgage applicants.

At the same time banks will also be cutting back on credit to business so the economy will stagnate and throw workers onto the dole - thereby increasing the numbers of people that go into default on their mortgages.

An era of stagflation beckons that will make the Grapes of Wrath look like a sunday school picnic.

The reason why this has not become 'apparent' yet in the media is simply because the media are afraid to publicise it before the GLA, Mayoral and Local Elections in case they terrify the sheeple that vote Labour, Tory and Lib Dem.

This British sub prime crisis is being hidden until after the elections to make sure the BNP does not do well in the elections - as simple as that. The media role in the political process is to create optimism or hide pessimism until it can bemanaged for the benefit of the puppet parties controlled by the media.

Do not expect to be told the truth about this crisis until after the May elections.

Those who have lived on credit cards and the hope that that house price rises will cover their debts are about to witness the collapse of the credit escalator.


Prepare for the same sites as witnessed in Los Angeles in the US, where tent cities of evicted families have sprung up on abandoned land on the edge of the city, shanty towns of homeless workers who have had their homes taken from them and then left to live with their families in poverty and homelessness.

That is the legacy of the New Labour Fabian experiment - poverty, homelessness and the enrichment of the international banking cartels and greedy fat cat bankers.

Based on a survey carried out by the credit reference agency Experian, the map rates the country's parliamentary constituencies according to how many struggling households - in what they term a "sub-prime" category - each contains.

The stark contrast between those who are struggling and those who are least at risk can be seen along purely geographical lines on the map. But there is a political discrepancy, too.

According to the analysis, most of the 5.1 million households in danger are in Labour strongholds.

Over the past few weeks, Downing Street has finally realised that the credit crunch is no longer an international problem - impacting only the City of London and Northern Rock - but a phenomenon sweeping through Middle England and causing sleepless nights.

First came the sharp rise in utility bills and petrol prices last autumn. Then grocery bills started rocketing, with everyday essentials such as bread, milk and eggs all rising sharply. And now the country's mortgage lenders are locked in a race to see who can increase rates or deposits the fastest.

The triple whammy has combined to spread alarm through the key voting constituencies of "Essex Man" and "GMTV family". Yesterday's admission that Mr Brown has claimed groceries and utilities on his taxpayer-funded expenses is hardly likely to reassure voters that he feels their pain.

* Figures show percentage of households which are so badly in debt their homes are at risk of being repossessed.