The New Fascism - Torch of Shame 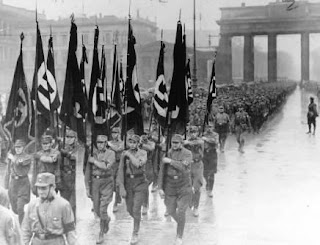 The images of the Metropolitan Police forming a fascistic black uniformed guard around the Olympic torch as it was paraded through the streets of London yesterday were eerily reminiscent of the marches of the Nazi stormtroopers in pre-war Germany. We have all seen the footage of the old German Nazi marches before the Second World War on TV shows on the History Channel and the images yesterday of the Metropolitan Police smashing pro-Tibet protestors off the streets to make way for the ethnic minority torchbearers was eerily reminiscent of that era.

As the thousands of police officers on duty marched alongside the laughable symbol of liberty that is the Olympic torch, just like Nazi stormtroopers once marched alongside the Swastika flag in Germany, the comparison became clear. In order to ensure that no-one dared protest about the ongoing Chinese state genocide of the indigenous Tibetan people, the mask of the British Multi-cultural state slipped and revealed its true fascist nature.

Multi-Cultural is the new fascism, a racist and oppressive ideology. At the same time as it removes the rights of the indigenous people to protest against mass immigration and the cultural destruction of our national heritage, it uses members of ethnic minority groups to seek to obscure its fascism. But strip away the patronising tokenism of using ethnic minority torchbearers to carry the torch and the true nature of the multi-cultural state can be discerned. It is a police state, one where the right to protest and dissent is seen an act of aggression against the criminals in government and where acts of peaceful protest are met with extreme violence by the organs of the British State.

The brutal violence inflicted upon the protestors by the police was similar to the beatings given out to the pro-hunting demonstrators a few years back and also reminiscent of the ejection of protestors from the Labour conference in 2006 by hired thugs. The protestors in London were not just prevented from obstructing the Olympic torch and moved out of the way, they were thrown to the ground, beaten and then wrestled away by dozens of police officers acting with extreme violence under the direct orders of their bully boy senior officers. This was pure fascism, and the use of the Met Police to smash those that sought to object to one the most criminal regimes on the planet was an act of appeasement towards totalitarianism not seen since the days of Neville Chamberlain in 1937.

Yesterday the Labour government became complict in the crimes of the Chinese government against their own people and the indigenous people of Tibet. At the same time as it revealed just how brutal and violent it truly is against all those it regards as dissidents. It also showed to us all just how far the Police as an institution have become corrupted by the Labour government. The role of the Police is not to blindly obey the criminal orders that the criminals in the Labour government order them to obey, for the primary role of the Police in a democracy is to serve and protect the community and that means protecting us even from the government itself if required. The Metropolitan Police, under the control of the convicted racist and New Labour lickspittle Sir Ian Blair, have become the para-military wing Political Correctness and the uniformed thugs of the Labour Party, always willing to crack a few heads of protestors in order to demonstrate their servility to their political paymasters.

Many of those demonstrators who were attacked by the Police yesterday under the orders of Gordon Brown and his cabal of brutes in suits would have been long term supporters of the Labour Party and political correctness. As is usual in history it is only when those who support criminal regimes end up crushed under the jackboots of that regime that they finally wake up.
Posted by Defender of Liberty at 03:40