The Green Party and Paedophilia 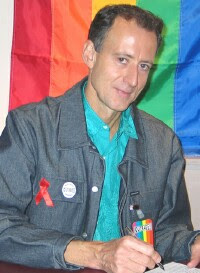 Nick Ericksen of the BNP makes a few idiotic comments on a blog to incite debate in 2005, is reported in the Jewish Chronicle as part of their racist campaign to prevent the indigenous British people having a voice in the Multi-Cultural political process and then resigns as a candidate for the BNP in the GLA elections.


Peter Tatchell, the parliamentary candidate for the Green Party in the Oxford East constituency once said,

“Several of my friends… had sex with adults from the ages of 9 to 13… It is time society acknowleged the truth that not all sex involving children is unwarranted, abusive or harmful”.

Will the Green Party Mayoral candidate, Sion Berry, be demanding that Mr Tatchell withdraw from the London elections, or does she and her party also endorse the sexual abuse of children?

I suspect that the Green Party endorses both Peter Tatchell and his comments on paedophilia and child rape.

Here is an article by Tatchell where he blames the 'straight males' of the world for all evil on the planet from the death of the dinosaurs to The Wurzels. I thought sexism was illegal and Heterophobia unnacceptable ;

Here is when he stood in the previous Oxford East elections - we can assume he is going to be the candidate in the next one ;

http://profile.myspace.com/index.cfm?fuseaction=user.viewprofile&friendID=233345798
Posted by Defender of Liberty at 06:28

Lee Barnes wrote ... Peter Tatchell, the parliamentary candidate for the Green Party in the Oxford East constituency once said ... Link/ref?