The Genetic Map Of Europe 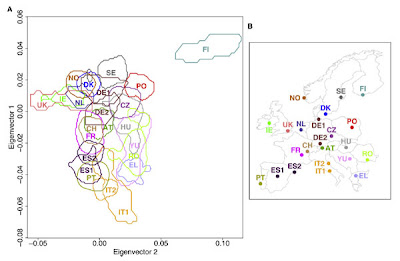 The next time some insane genocidal Liberal Fascist says 'there are no indigenous British people' then send them this link ;

Not only are all the indigenous European people a unique related racial group, but also DNA tests can now reveal which nation we come from as the ethnic groups derived from the European racial group have unique DNA sequences which can be linked to a geo-specific region.

Also read the article in The Guardian below. This article points out that the future of medicine is race and ethnic based medicines called Pharmacogenomics, and race and ethnic DNA differences have a vast impact on disease and treatments for disease.

So the next time some Liberal Fascist says there are no indigenous British people then we can tell them they are insane, genocidal criminals who wish to ensure future generations die of diseases because the existence of race based medicines conflicts with their outdated and obsolete 20 th century Marxist rubbish that there are no races, just one human race.

Biologists have constructed a genetic map of Europe showing the degree of relatedness between its various populations.

All the populations are quite similar, but the differences are sufficient that it should be possible to devise a forensic test to tell which country in Europe an individual probably comes from, said Manfred Kayser, a geneticist at the Erasmus University Medical Center in the Netherlands.

The map shows, at right, the location in Europe where each of the sampled populations live and, at left, the genetic relationship between these 23 populations. The map was constructed by Dr. Kayser, Dr. Oscar Lao and others, and appears in an article in Current Biology published online on August 7.

The genetic map of Europe bears a clear structural similarity to the geographic map. The major genetic differences are between populations of the north and south (the vertical axis of the map shows north-south differences, the horizontal axis those of east-west). The area assigned to each population reflects the amount of genetic variation in it.

Europe has been colonized three times in the distant past, always from the south. Some 45,000 years ago the first modern humans entered Europe from the south. The glaciers returned around 20,000 years ago and the second colonization occurred about 17,000 years ago by people returning from southern refuges. The third invasion was that of farmers bringing the new agricultural technology from the Near East around 10,000 years ago.

The map also identifies the existence of two genetic barriers within Europe. One is between the Finns (light blue, upper right) and other Europeans. It arose because the Finnish population was at one time very small and then expanded, bearing the atypical genetics of its few founders.

The other is between Italians (yellow, bottom center) and the rest. This may reflect the role of the Alps in impeding free flow of people between Italy and the rest of Europe.

Data for the map were generated by gene chips programmed to test and analyze 500,000 sites of common variation on the human genome, although only the 300,000 most reliable sites were used for the map. Dr. Kayser's team tested almost 2,500 people and analyzed the data by correlating the genetic variations in all the subjects. The genetic map is based on the two strongest of these sets of correlations.

The gene chips require large amounts of DNA, more than is available in most forensic samples. Dr. Kayser hopes to identify the sites on the human genome which are most diagnostic for European origin. These sites, if reasonably few in number, could be tested for in hair and blood samples, Dr. Kayser said.

Genomic sites that carry the strongest signal of variation among populations may be those influenced by evolutionary change, Dr. Kayser said. Of the 100 strongest sites, 17 are found in the region of the genome that confers lactose tolerance, an adaptation that arose among a cattle herding culture in northern Europe some 5,000 years ago. Most people switch off the lactose digesting gene after weaning, but the cattle herders evidently gained a great survival advantage by keeping the gene switched on through adulthood.

An ambitious project to create the most detailed picture of human genetic variation yet has been launched by British and American scientists.

The 1000 Genomes Project will map the tiny fraction of genetic material that differs between people, giving scientists unprecedented insight into why some are more susceptible to disease than others.

Scientists know that any two humans are more than 99% identical on the genetic level. The remaining fraction helps explain differences in people's health.

The $50m (£26m) map, which is expected to take three years to complete, will be made freely available, allowing scientists to pinpoint the genetic causes of common disorders swiftly and help tailor medical treatments to individual patients. Researchers will scan the genetic make-up of at least 1,000 people who either live in, or have ancestry tracing back to, Europe, Africa, Japan, China, India and Mexico. From these scientists will create a catalogue of genetic variation found in as few as 1% of the population.

"Such a project would have been unthinkable only two years ago," said Dr Richard Durbin, a geneticist at the Welcome Trust's Sanger Institute in Cambridge, who co-chairs the project. "We are moving forward to building a tool that will greatly expand and further accelerate efforts to find more of the genetic factors involved in human health and disease."

Since the 13-year-long Human Genome Project was completed in 2003, scientists have strived to look deeper into 3bn pairs of letters that form the human book of life. One, the HapMap project, has revealed large-scale genetic variations between populations, which have helped scientists identify more than 100 regions linked to conditions such as obesity, diabetes, heart disease and cancer.

Scientists look for genetic causes of disease by comparing genome scans from healthy people with sick people. But these studies usually only point to vague regions in the genetic code that may be hundreds of thousands of letters long.

"This project will give scientists a complete map of all the variation in that region, so they'll be able to use it to tease apart what might cause the illness and that will lead to better diagnosis and better understanding of the disease," said Durbin.

The project will begin this year with three pilot studies. The first will involve an in-depth scan of two families; the second will sequence the genomes of 180 people, while the third will examine 1,000 genes in 1,000 people. The main project will begin next year.

This is further confirmation of what we already know.

"By far the majority of male gene types in the British Isles derive from Iberia (Spain and Portugal), ranging from a low of 59% in Fakenham, Norfolk to highs of 96% in Llangefni, north Wales and 93% Castlerea, Ireland. On average only 30% of gene types in England derive from north-west Europe. Even without dating the earlier waves of north-west European immigration, this invalidates the Anglo-Saxon wipeout theory..."

"...75-95% of British Isles (genetic) matches derive from Iberia... Ireland, coastal Wales, and central and west-coast Scotland are almost entirely made up from Iberian founders, while the rest of the non-English parts of the British Isles have similarly high rates. England has rather lower rates of Iberian types with marked heterogeneity, but no English sample has less than 58% of Iberian samples..." wiki

And as I like written historical sources, here's a bit more from Gaius Julius Caesar(Commentaries on the Gallic War) - he mounted expeditions to the south coast of Britain in 55 and 54BC respectively

"The interior of Britain is inhabited by people who claim, on the strength of an oral tradition to be aboriginal; the cost by Belgic immigrants who came to plunder and make war - nearly all of them retaining the names of the tribes from which they originated - and later settled down to till the soil. The population is exceedingly large, the ground thickly studied with homesteads, closely resembling the Gauls, and the cattle are very numerous........."

It all sounds, well, indigenous.

As can be seen by the gene maps we are very similar to the Irish, and have quite a crossover with the Scandinavians and Germans but are most closely linked to the Dutch. Interestingly these groups seem to be the most popular with Britishpeople despite hollywood's efforts to cause friction. Of course such studies are highly political and you dont get a grant if you come up with the wrong answer. Interestingly when genetic studies of Jews proved that most were of Khazarian descent rather that the original Judaians the results were never published.

1. The British and Irish seem identical. Yet we are always being told that Britain is a "mongrel" nation because of succesive waves of immigration.
You could not say the same about Ireland. So why are we both the same genetically?

2. The size of each nations footprint on the map is determined by the amount of genetic diversity within it's population rather than by population or geographical size.

The Poles seem to have a remarkably small genetic diversity - their footprint is half that of either of the Italian footprints, for example.
It is remarkable because for the 5 centuries prior to the Holocaust Poland was host to a substantial Jewish minority. You would have thought that the presence of a large Middle Eastern population in a Northern European people would have massively enlarged genetic diversity.
That the opposite appears to have happened suggests that immigration of an alien people does not produce a rainbow nation but rather 2 nations.
The Nazis effectively wiped out one leaving behind an homogenous, Polish nation.
Food or thought in Britain and France.

F'ing marxists. But seriously, that estimate by Oppenheimer is quite low when compared to many other studies conducted. If you average most of the studies done, England is more like 40-45% German/Scandinavian/Dutch, the better part of the rest being indigenous Celtic. 30% is probably a bit low.