The Jewish Congress and the 'Nazis' - Column 88 and Searchlight 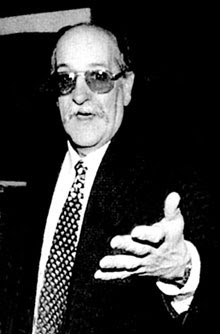 " Cash or a cheque will do mate. Thanks a lot".

Interesting story below about how Canadian Jewish activist groups set up, ran and paid the main organiser of Canada's first Neo-Nazi organisation in order to ensure the group did not dwindle away and vanish before its first incompetent 'Fuhrer' could pull on his jackboots and swastika armband and then march through the streets thereby inflaming media and public sentiment.

Note also that the article reveals that contrary to the myth of 'nazi violence' that is the staple of such anti-Nazi propaganda, the only violence was from primarily Jewish groups directed at 'the Nazis'.

Its a pity that the Jewish anti-Nazis didnt realise that the Neo-Nazis were in fact being run by other Jewish groups !

It appears that whilst one arm is doing the Hitler salute, the other is busy filling its pockets with cash donations from the alarmed public.

It sounds very much like the Searchlight founded Column 88 group that was set up in the 1980's by Gerry gable, Searchlight and Special Branch.

It appears that whenever the shysters in Searchlight who peddle the myth of the 'nazi menace threatening society and the 'Jewish / Muslim/ Black / Gay/ Lesbian community' fear that their income stream is jeopardised from a lack of actual 'nazis' in society that they then go and set up a fake 'nazi group' to use as a fundraiser.

It also appears that whenever the government want to pass more laws to restrict free speech, then up pops a new 'nazi group' whose rhetoric and actions provide the pretext for passing those new laws.

Sieg Heiling Nazis = plenty of sheckels for the plethora of anti-Nazi groups and the perfect excuse to undermine free speech.

New laws were wanted by the Tory government in the 1980's to restrict free speech, undermine support for the Nationalist right in the form of the National Front at that time and also to bring in more donations to Searchlight.

So Searchlight and Special Branch set up Column 88.

Column 88 allowed the Tory government to bring in new Hate Speech laws to fight 'racism' as defined in the Public Order Act 1986 and also draw in massive donations to Searchlight to fight the 'Nazi menace of Column 88'.

The government got the anti-free speech laws it wanted and Gerry Gable made another shit load of dosh.

It was a win / win situation for the State and Searchlight.

Note also that Richard Warman, an employee of the Canadian Jewish Congress, in the article below was busy posting anti-semitic messages on Stormfront - which is exactly what the idiots on Lancaster Unity admit doing. Those that post on Lancaster Unity have frequently boasted about how many fake identities they have on Stormfront and how easy it is to wind up the 'nazis' on the Stormfront site by posting up Nazi comments on the site.

It appears that the same methodology is employed across the world, from Canada to the NPD in Germany ( who were infiltrated by agents of the German security services who published illegal propaganda designed to get the party banned ) to Lancaster Unity activists posting anti-semitic comments on Stormfront, an American web site.

The real tragedy is that whilst scum bags like Gerry Gable and Lancaster Unity are profiting from peddling the myth of the nazi menace, the money donated to Searchlight and Lancaster Unity would be far better spent on dealing with the real anti-semites in Britain - the Islamists and the Far Left who are responsible for the overwhelming majority of racist attacks against Jews in Britain.

Whilst Gable, Lancaster Unity and their cronies in Special Branch profit personally and politically from the myth of the nazi menace, the Jewish community in Britain have to bear the burdens of their pathetic plans and machinations.

For more information on Gerry ' The Cash Machine ' Gable and Column 88 read here ;

In 1965 and 1966, the Canadian Jewish Congress helped organize the fledgling Canadian Nazi Party. That sounds crazy, but it's true, and I wrote about it in Shakedown, my new book about Canada's human rights commissions.

In a letter to the editor in the Citizen last week, the CJC's current co-president, Rabbi Reuven Bulka, called my book's description of the CJC's role "fiction." He said all the CJC did for the Nazis was buy them a bottle of rum.

It's true that the CJC did buy drinks for Nazis in the 1960s. That's pretty strange in itself, and I'd like to hear more of Rabbi Bulka's thoughts on spending Jewish charitable donations that way. But the CJC did a lot more than that: they hired an ex-cop named John Garrity to go to work for the Canadian Nazi Party.

Garrity helped organize that rag-tag band of losers, though they never amounted to anything except for fodder for the press.

There were only a dozen active Nazis when Garrity joined them and they weren't really a political party. He called them "harmless misfits," and they were -- their leader, John Beattie, was a nervous, gaunt, unemployed 24-year-old clerk who spent much of his time dodging angry Jews who tried to beat him up. (One of Garrity's jobs was to help Beattie escape street fights.)

Garrity brought more than just rum to the Nazis. He brought with him pretty much the only organizational talent the group had. They put him in charge of membership. Garrity called himself the "Heinrich Himmler" of the party, and a "Nazi leader for the Jewish Congress."

Of course, Garrity helped his paymasters at the CJC, too, giving them information about the names of party members and donors. And when Garrity finally quit the Nazis, he wrote a tell-all about his adventure in Maclean's magazine.

Garrity larded that report with personal insults toward Beattie and the Nazis. But he did acknowledge that they had never done, or even contemplated doing, anything illegal. All of the violence he witnessed was directed at Beattie, usually by Jewish vigilantes. "Sadly, it is the ... anti-Nazi extremists who, in their attempts to destroy Beattie, provide him with most of the publicity he craves. If it weren't for the riots and the assaults and the public protest meetings they hold, there'd be no real news in Beattie," Garrity wrote.

And that is the importance of this story and why I put it in my book about human rights commissions. Beattie hadn't done anything illegal. He was just a loser who believed in a discredited ideology. But the CJC wanted to bring in political censorship laws and I believe they needed to build up the threat to persuade Parliament to abridge Canada's freedom of speech.

Garrity puffed up a group of Nazi nobodies into a national menace, first through organizational support and then through spectacular media publicity. And, sure enough, Parliament enacted section 13 of the Canadian Human Rights Act, which censors offensive speech.

He became the boss, turning the Heritage Front into Canada's leading white supremacist group. This time it wasn't just Jewish money that was spent propping up neo-Nazis -- all taxpayers paid for it.

Which brings us to the present day -- and back to Rabbi Bulka and the section 13 censorship law. Canada's largest customer of section 13 is Richard Warman, who has been the complainant in all but two cases heard by the tribunal this decade. The CJC was so impressed that they gave Warman an award.

But, in a stunning human rights tribunal ruling last month, Warman himself was rebuked for posting anti-Semitic comments on Stormfront, a neo-Nazi website, including a message calling Jews "scum." Warman has stated that he was attempting to gather information on real Nazis, but the tribunal called his actions "disappointing and disturbing," and ruled that he risked encouraging more hateful messages himself.

Warman's actions appalled the tribunal, but apparently not the CJC. Just as the CJC did with Garrity, Nazi opponents continue to stir up neo-Nazi incidents -- as if there aren't enough real threats to Jews as it is.

Perhaps Rabbi Bulka can explain that one, too.

Ezra Levant is the author of Shakedown: How our Government is Undermining Democracy in the Name of Human Rights.
© Copyright (c) The Ottawa Citizen

Posted by Defender of Liberty at 09:36

This is interesting,
Somebody mentioned David Myatt on that 'Happy Harry' site, and as one does, I followed various links into all sorts of dark places, and all roads lead back to Gerry Gable.
When I first got this computer I remember reading some of Myatt's Numinous NS stuff and I was puzzled about his Islamic 'conversion'. Well now I know.