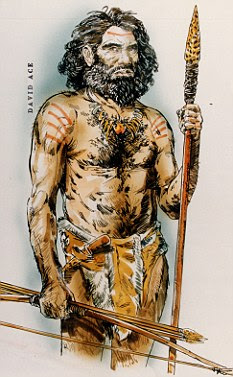 
For a while I have been meaning to create a definition of the various British peoples for debates to clarify the issue - here it is ;

A) The Aboriginal British - These are the earliest settlers who returned to Britain after the last Ice Age which ended around 16,000 years ago. (1)

They have been permanent rsidents in Britain for 16,000 years.

These include people like Adrian Taggart who was DNA tested and found to be a direct descendant of the Cheddar Gorge Man whose bones have been carbon dated to be over 10,000 years old. (2)

Taggart, then, is living proof that southern England’s farmers were not descended, as once believed, from Middle Eastern migrants, but from European Paleolithic (Old Stone Age) and Mesolithic (New Stone Age) people.


From these Paleolithic peoples come the Celtic population of Britain, the Welsh, Irish and Scots populations.

These are the Aboriginal Britons - those who have had unbroken occupation of Britain for 16,000 years.

(B) The Indigenous Anglo-Saxon English.

That is 600 years longer than the Bantu black population in South Africa who are considered as indigenous to South Africa. (3)

At the time of European contact, the dominant indigenous peoples were Bantu-speaking peoples who had migrated from other parts of Africa about one thousand years before. This places the Bantu people in South Africa from 1050 onwards.

The English can therefore be considered the Indigenous English.

(C) The Norman British - These are the descendants of the Normans who moved to Britain in 1066.

These are the people of all races and religions classified together into one group as they do not fit the legal criteria of being here in Britain since Time Immemorial. Time beyond legal memory.

This is the formal beginning of English law which is dated 3rd September 1189. This is the accession of Richard I, and the end of the reign of Henry II the father of the Common Law.

Posted by Defender of Liberty at 09:55

Wow, thanks for providing this important data and history Lee. Great ammunition we can now use on the cultural marxists. I believe that this data could possibly be used to stop the halt of mass immigration into indigenous populations, but I wouldn't hold your breath, it may even speed up the extermination process.

The Normans were in fact originally scandinavians in any case, they invaded northern France in about 915 AD, ans as 'Men from the North', gave this name to the region of north France that we still refer to as Normandie

As a matter of curiosity one wonders how many people in say, for example, Cracow in Poland or Parma in Italy. Just two towns well apart from each other would have similar DNA to the Cheddar man.
Would the percentage be exactly the same as in the UK

Eh Comrade. doesn't he look a bit like us .

Remember what I said a long time ago, we are proper Britons and you probably are more Celt/Welsh than I am ;o)

One Nation, One people, One Leader !