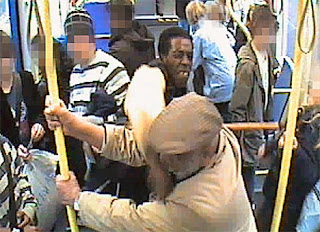 Yet again the dumb fucking Leftist and Liberal judges that infest the legal system like lice on a dying dogs back, have let a piece of shit free.

A thug who left a 97-year-old war veteran blind in one eye after trying to push past him on a tram escaped prison today.

Stephen Gordon, 44, was told it would not "protect the public" if he was sent to jail.

He was given a three-year supervision order, which requires him to seek psychiatric treatment, after being convicted of grievous bodily harm.

He hit Shah Chaudhury in the face and called him a "b******" in an unprovoked attack on a tram at East Croydonm, Surrey.

Mr Chaudhury, who walks with the aid of two sticks, lost the use of one eye.

He had lived independently but after the attack his health deteriorated and he is now in a care home.

Mr Chaudhury said in a statement that he got on to the crowded tram but had to stand because nobody would give him a seat.

Because of his unsteadiness he had to grip the rail with both hands but as Gordon pushed past, his hat was knocked off.

Mr Chaudhury said: "I had done nothing to provoke him."

After the attack Gordon left the tram and was chased by two children who provided vital evidence.

At the trial Gordon, of Academy Gardens, Croydon, claimed Mr Chaudhury had punched him and the CCTV footage which caught him was fake.

Sentencing him Judge Kenneth Macrae said: "I have no doubt that the root cause of this offence was your illness. It was a single blow but the consequences were terrible.

"At first blush, an immediate and significant prison sentence would well be justified. That would do nothing to protect the public in the future and my real concern is the public."

Detective Sergeant Sam Blackburn, of British Transport Police, said he was disappointed with the sentence.

This judge is the same cunt that gave the Wonderland paedophile gang sentences that equated to 15 months in prison.

SEVEN paedophiles jailed yesterday for membership of the world's biggest child pornography ring will all be free within 15 months.

The men, the British branch of a 180-member "fellowship" spanning a dozen countries, received sentences ranging from 12 months to two and a half years. Each will be released after serving half his sentence. One man who had 9,000 pornographic images of children on his computer when he was arrested will leave prison in six months.

Children's charities condemned the leniency of the sentences, which they said would not deter other men from taking part in the widespread distribution of internet paedophile pornography. Between them, the seven traded more than 120,000 "depraved" and "unimaginable" images of children as young as three months on a highly secretive internet channel known as the Wonderland Club.

They belonged to "a vast international lending library" of paedophile pornography purely for personal gratification. There was no commercial gain. All seven pleaded guilty to conspiring to distribute indecent images of children between 1996 and 1998 and were liable to maximum prison terms of three years.

But there was widespread anger that none of the seven received the maximum sentence not available to the courts.They had their sentences reduced for making guilty pleas and because they were involved to differing degrees with the club, which had an entry requirement of 10,000 paedophilic images.

In a joint statement, the NSPCC, Barnardo's, ChildLine, the Children's Society, the National Children's Bureau, NCH (formerly National Children's Homes) and National Council of Voluntary Child Care Organisations said they were "deeply disappointed" with the sentencing. John Carr, internet consultant with NCH, said: "It sends out a contrary message to child sex offenders who use the internet. We viewed the change in the law as a recognition that these offences pose a very serious threat to the safety of children.

"The leniency displayed seems to say that this type of abuse will be tolerated by today's society. British police are committing more, and better, resources to tackle internet crime and the prevention of child sex abuse is now among their highest priorities. However, if this is not reflected in sentencing, child sex abuse will continue to thrive on the internet." Det Supt Peter Spindler of the National Crime Squad, which led the investigation, said: "This operation has helped change the law in this and other countries."

Judge Kenneth MacRae told the men at Kingston upon Thames Crown Court that their activities "pandered to the basest interests of man". He said: "Children are the future; they should be cared for and protected. All of you subscribing to Wonderland betray that principle by the use and abuse of children for your perverted gratification, horrifying all right-minded people. You have directly or indirectly exploited the most vulnerable."

David Hines, 30, of Bognor Regis, West Sussex, was sentenced to two and a half years and placed on the sex offenders' register for life. He was the senior European controller of the Wonderland network and had been abused as a child. Ian Baldock, 31, of St Leonards, East Sussex, who was an environmental campaigner and worked for the Oxford University Press, also received two and a half years and was placed on the register for life.

The five others must register as sex offenders for seven years. Gavin Seagers, 29, of Dartford, Kent, a university graduate whose father is a convicted child abuser, was jailed for two years. He was a commander in the Sea Cadets before his arrest.

Gary Salt, who achieved high status in Wonderland by placing pictures of himself abusing children on the internet, is serving 12 years for child sex offences. Stephen Ellis, 40, of Norwich, killed himself after being charged and David Chaikin, 36, another Wonderland member from Maidenhead, Berkshire, received an eight-month sentence in 1999.

The director of child protection charity Kidscape, Dr Michelle Elliott, said: "You would get a longer sentence for accumulating masses of parking tickets or for burglary. I am absolutely stupefied by this leniency.

"It sends a clear message that these crimes are not being taken seriously."

These two verdicts reveal that the Judges as well as the government are part of the problem of the British justice system.

The fucking judges put Kevin Hughes away for 2 years because he had a scuffle with an asylum seeker that led to the asylum seekers shirt being ripped.

This cunt blinds an old man and he walks free - yet we all know the real reason dont we. Yep, hes from an ethnic minority.

As far as I was taught at Law School the principle concerning liability for an individuals actions is that unless they were in the grip of a mental illness to an extent that they were unaware of what they were doing then they are liable for it.

This fucker was mentally competent enough to LIE in the interview with the police about the attack in order to cover his arse.

Therefore he should have been jailed for his crime and got treatment in prison.

Yet again the judges prove the old saying is true -

As fucking usual.
Posted by Defender of Liberty at 06:57