Climate Change Proved Correct But Cause IS A LIE 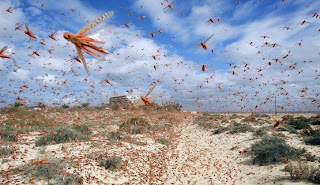 Many people do not believe in climate change.

I know its true as I see it happening every day before my eyes.

The community and country where I live is changing, the environment being destroyed and the climate changing as a result.

The green areas are being torn down to build new houses, the flood plains stripped away to build houses for immigrants that then get flooded in rain fall, the trees denuded and factories spring up to supply these imigrants with more commodities.

Last week my street was flooded. What caused this was new houses being built on the streets adjacent my road. This led to more demand on the drains and as no updating of the drainage system had been done this resulted in a flood.

The flood would not have occured if the drainage system had been updated to cater for the extra demand on the drains in my street. Instead the new houses were built and no work done to update the drains - and as a result the streets flooded with backed up sewage after a storm hit.

Blaming the storm for the flood is how the climate change idiots get away with evading the real issue - which is environmental stress caused by human overuse and exploitation of the environment and failure to invest in upgrading essential systems such as drains to cope with the extra demand from new houses and populations.

The floods in recent years in the UK caused immense damage primarily because the houses in those areas were built on flood plains. Building houses on a flood plain is idiotic, as sooner or later a flood will flood the flood plain and those houses will flood.

It is not the flood that causes the damage, it is building houses on a flood plain.

THESE ARE MAN MADE DISASTERS, THEY ARE NOT CAUSED BY EXTRA FLOODS DUE TO CLIMATE CHANGE.

They are floods that cause damage as man has ignored the fact that we should not build on flood plains.

There have always been famine in history, and yet man keeps on breeding more and more people.

Now a famine has hit again, as they always have and always will, and millins face starvation.

The famines are not caused by climate change as they have always existed.

The suffering of the people is caused simply because of over population. If the people lived in accord with the carrying capacity of the land then they would not starve when the famines come.

MAN CREATES HIS OWN HELL.

This is climate change is action AND IT IS SIMPLY HUMAN OVER POPULATION.

CO2 rise in recent years has been due to deforestation caused by industrial growth to sustain demand for new commodities from rising populations and also for new housing, this removal of trees led to the increase in C02 emmissions we have seen over recent years simply because the trees thaT once removed CO2 were no longer there to remove CO2 and at the same time new CO2 levels rose as new industries and industrial growth increased in order to provide new goods for the rising human opulations on the planet.

It is a vicious circle - and it all begins with OVER POPULATION.

But this porcess of environmental destruction is not being caused by CO2 emissions or gases from industry, though these are problems associated with climate change they are simply symptoms of the problem.

TOO MANY HUMANS ARE DESTROYING TOO MUCH OF THE PLANETS RESOURCES AND CAUSING MASS ENVIRONMENTAL POLLUTION AND DEVASTATION AS A RESULT.

It is not CO2 emmissions causing climate change - IT IS HUMAN OVER POPULATION.

The myth of climate change is based on the grand deception of blaming past industrial models and ignoring human over population.

Lets take for example the rise in C02 emmisions - what causes this is simply industry involved in more industrial development to produce commodities for the extra millions of new consumers spat out as new births across the world every day.

Now industry is cutting co2 emmissions as a grand gesture towards 'climate change' but this is in order to divert us and our attention from the REAL PROBLEM which is simply human global over population.

CLIMATE CHANGE IS THE THEORY OF MALTHUS IN ACTION.

Rising human population levels dstroy the environment and as a result the climate changes.

Human population levels are causing what we have been brainwashed into believing is climate change.

The only factor involved in climate change responsible for all aspects of environmental destruction, industrial development and localised environmental problems is simply over population.

We have been conned by the globalists into blaming simple and primitive methods of industrial development, such as the old style factories of the past who worked without carbon scrubbers, as this allows them to blame the industrialists of the past for a problem whilst ignoring the reality of the problem which is simply over population.

They want to carry on churning our commodities and plastic rubbish that we do not need, and therefore they need to create a critique and model of climate change that does not blame industrialisation, that continues to profits them and that allows continual economic and industrial development in order to allow them to carry on producing goods for the rising human populations on the planet.

THEREFORE THE INDUSTRIALISTS CANNOT EVER SAY ' WE MUST LIMIT INDUSTRIAL GROWTH AND HUMAN POPULATION NUMBERS' AS THEY ARE CUTTING THEIR OWN THROATS.


Instead they say ' we can have unlimited hman population growth and continual industrial development as the problem is simply caused by a lack of carbon scrubbers that is leading to over production of C02 and other greenhouse gases which is causing climate change'.

Climate change is a deception, as the issue is simply human over population.

The Greens wont talk about this issue of over population as they are simply reds that pretend they care about the environment.

The capitalists wont talk about this issue of over population as they demand endless industrial development for their profits.

The Liberals wont talk about this issue as they support open borders and mass immigration.


ITS HUMAN OVER POPULATION !

Thats the ONLY issue that should be called climate change.

Next time they talk about climate change say ' NO ITS HUMAN OVER POPULATION AND THE MASS MOVEMENT OF PEOPLES DUE TO THEM DEVASTSING THEIR OWN LOCAL ENVIRONMENTS AND THEN SEEKING NEW LAND TO DESTROY THAT IS THE DRIVER OF SO CALLED CLIMATE CHANGE' .

HUMANITY IS A PLAGUE, like locusts we over reproduce and then devastate our own lands.

Then we are forced to move out of those devastated areas and invade new areas to devastate those new lands in order to feed ourselves.

We in the West have been lied too and taught to call that process mass emigration and mass immigration and those people eco-migrants fleeing climate change.

They are not eco-migrants - they are locusts.

They are not fleeing 'climate change' - they are fleeing the consequences of their own over population and the destruction of the environments they themselves caused by their actions of allowing themselves to over reproduce beyond the lands carrying and feeding capacity.

What they have done is what locusts do. The locust population explodes, strips the land bare and then the swarm is forced to move to seek new food and land to devastate.

Until Humanity starts to act responsibly and limit his reproduction and not act like locusts then the planet will be destroyed, and Man with it.
Posted by Defender of Liberty at 09:10

Labels: Climate change and over population

Human over population damages the environment for sure, and breeding populations beyond the capacity of a nations ability to produce is not wise.

As for CO2 and global warning I'll go with the people's view from the below link. Namely the earth warms up and the earth cools down and what causes this is most likely 95% the sun, man's input is minimal.

CO2 rises follow the increases in heat as CO2 is released from the seas. Also CO2 is good for plants.

If you read the linked story maybe we should be more worried that the level of oxygen in the atmosphere as its coming down.

Climate change is happening but man is only a minor part of the problem, Climate variations are the the earths natural cycle, man being a narrow minded being assumes that in his short reign he has power over all.

In the years to come when we no longer release major CO2 amounts via our economies and have catalytic converters up our butts and yet the earth temperature continues to rise what new thing will we blame? Of course it will still be all whiteys fault.

The motto of the elites is always 'Blame Whitey'.