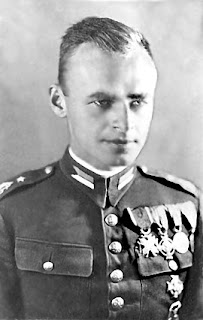 
I recently got involved in a debate with a bunch of Holocaust Deniers, and as usual they proved they are simply fanatics. The debate surrounded the ongoing attacks on Guillermo De Faye over his new book attacking revisionists.

Personally I think the criminalising any variant of the myriad subjective historical narratives and perspectives around any historical issue is an abuse of the law and a fundamental breach of the right to free speech.

As for the Holocaust though the issue as I see it can be cleared up by reference to one man, an real hero of mine, the Polish Nationalist Witold Pilecki, and also bye reference to the reports and writings of Colonel Jan Karcz who spent time in Birkenau.

He is a real hero for real nationalists and he proves the link between nazi anti-nationalism and communist anti-nationalism. Those that define Nazism as a 'nationalist' movement are proved to be wrong by the experience of Poland and Polish nationalists like Witold who were arrested, tortured and interned in concentration camps for fghting against the Nazis in Poland.

If anyone can get hold of the reports he filed from Auschwitz and the reports filed by Colonel Jan Karcz from Birkenau, then they they will reveal the reality of the Holocaust in a way that can never be challenged.

Seeing as this information came from nationalists who experienced the reality of the concentration camps, and not communists or revisonists who were never in the camps, then it would prove the existence of the Holocaust.

During World War II, Witold became the only known person to volunteer to be imprisoned at Auschwitz concentration camp. While there, he organized the resistance movement in the camp, and as early as 1940, informed the Western Allies of Nazi Germany's Auschwitz atrocities. He escaped from the camp in 1943 and took part in the Warsaw Uprising. Pilecki was executed in 1948 by the communists. Until 1989, information on his exploits and fate was suppressed by the Polish communist regime.

In 1940, Pilecki presented to his superiors a plan to enter Germany's Auschwitz concentration camp at Oświęcim (the Polish name of the locality), gather intelligence on the camp from the inside, and organize inmate resistance. Until then, little had been known about the Germans' running of the camp, and it was thought to be an internment camp or large prison rather than a death camp. His superiors approved the plan and provided him a false identity card in the name of "Tomasz Serafiński." On September 19, 1940, he deliberately went out during a Warsaw street roundup (łapanka), and was caught by the Germans along with some 2,000 innocent civilians (among them, Władysław Bartoszewski). After two days of torture in Wehrmacht barracks, the survivors were sent to Auschwitz. Pilecki was tattooed on his forearm with the number 4859.

Auschwitz concentration camp photos of Pilecki (1941)At Auschwitz, while working in various kommandos and surviving pneumonia, Pilecki organized an underground Union of Military Organizations (Związek Organizacji Wojskowych, ZOW). ZOW's tasks were to improve inmate morale, provide news from outside, distribute extra food and clothing to members, set up intelligence networks, and train detachments to take over the camp in the event of a relief attack by the Home Army, arms airdrops, or an airborne landing by the Polish 1st Independent Parachute Brigade, based in Britain.

By 1941, ZOW had grown substantially. Members included the famous Polish sculptor Xawery Dunikowski and ski champion Bronisław Czech, and worked in the camp's SS administration office (Mrs. Rachwalowa, Capt. Rodziewicz, Mr. Olszowka, Mr. Jakubski, Mr. Miciukiewicz), the storage magazines (Mr. Czardybun) and the Sonderkommando, which burned human corpses (Mr. Szloma Dragon and Mr. Henryk Mendelbaum). The organization had its own underground court and supply lines to the outside. Thanks to civilians living nearby, the organization regularly received medical supplies.

ZOW provided the Polish underground with priceless information on the camp. Many smaller underground organizations at Auschwitz eventually merged with ZOW. In the autumn of 1941, Colonel Jan Karcz was transferred to the newly-created Birkenau death camp, where he proceeded to organize ZOW structures. By spring of 1942, the organization had over 1,000 members, including women and people of other nationalities, at most of the sub-camps. The inmates constructed a radio receiver and hid it in the camp hospital.

From October 1940, ZOW sent reports to Warsaw, and beginning March 1941, Pilecki's reports were being forwarded via the Polish resistance to the British government in London. These reports were a principal source of intelligence on Auschwitz for the Western Allies. Pilecki hoped that either the Allies would drop arms or troops into the camp, or the Home Army would organize an assault on it from outside. By 1943, however, he realized that no such plans existed. Meanwhile the Gestapo redoubled its efforts to ferret out ZOW members, succeeding in killing many of them. Pilecki decided to break out of the camp, with the hope of personally convincing Home Army leaders that a rescue attempt was a valid option. When he was assigned to a night shift at a camp bakery outside the fence, he and two comrades overpowered a guard, cut the phone line and escaped on the night of April 26–April 27, 1943, taking along documents stolen from the Germans. In the event of capture, they were prepared to swallow cyanide. After several days, with the help of local civilians, they contacted Home Army units. Pilecki submitted another detailed report on conditions at Auschwitz.

These verbatim reports from Witold in Aushcwitz and Colonel Jan Karcz in Birkenau are what I consider 'Real History'.

These are a few of the points the revisonists ignored ;

1) The idea that nationalism in all its forms depends for its electoral, cultural and social progress on Holocaust revisionists winning their battle to 'fix' history they way they want it, is an example of the Nationalist version of Marxist False Consciousness, it is the same sort of false logic that led marxists to declare Marxism a science but all other political ideologies as false. It is an assertion with no evidence or proof to sustain it other than the fanatacism of those that believe in it.

Revisionism has NOTHING to do with nationalism, as in no way does it relate to any of the 3 core principes of nationalism.

Revionism is a rogue meme that has been allowed to contaminate nationalism as an ideology - and before nationalism can flourish again it must be excised from nationalist ideologies.


3) All revisionism does as an ideology is trigger an pre-prepared immune response from all sections of society who have been conditoned by the media to exhibit the same pavlovian response to revisionism. Revisonism empowers the enemies of nationalism as it produces the same social immune response each time it is present in a nationalist ideology. Revisionism kills nationalism.


4) By allowing the rogue meme of revisionism in nationalism merely creates a social immune group response to the presence of nationalism in the political bloodstream of society, because society has been immunised against revisionism.


5) Revisionists attack anyone in nationalism that rejects revisionism usually calling them a jew/red/crook etc etc - for example the ongoing attacks on De Faye. Regardless of the great work he had done for our people revisonists attacked him as he is against revisionism. The fanatics regard revisionism as more important than the 3 core principles of nationalism, taking power or loyalty to fellow nationalists. Therefore revisionists are the problem, not De Faye.


That means revisonists are not nationalists.

You can be a revisonist, but you cannot be a nationalist.


What next- should we include creationism as part of the revisonists nationalist ‘Maoist textbook’ - along with anti-semitism, hatred of slavs etc etc or perhaps we should also have a party line on the expulsion of the Jews under the Pharoahs as well.

To allow revisonism to be represented as a fundamental facet of nationalist ideology is to open the door to an endless stream of other irrelevant issues to become ‘fundamnetals’ of nationalism. There are only 3 fundamentals in nationalism.

All issues other than the 3 core principles in nationalism are political.

The aim of politics is to take power.

Politics evolves in line with society, whilst the 3 core principles remain eternal values at the core of nationalism.

REVISIONISM is therefore simply a political issue, and as it is an issue that damages our rise to power due to society being conditioned to reject it - then revisonism has to be excised from THE POLITICS OF NATIONALISM.

Revisionism is neither a core of nationalist principles and nor is it useful to political nationalism.

Political Nationalism is the nationalism of real nationalists who want to take power and save our race, folk, nations, cultures and environments through the political process.

Political Nationalism stands directly opposed by Idealistic Purists who reject political pragmatism for puerile idealism which merely ensures nationalism as a political force is perpetually relegated to the margins of society and hence can never take power.

Revisionists can be National Socialists - but they can never be nationalists. This is because any form of nationalism that allows revisionists into its ranks will never take power.

The only people who benefit from the poisoning of nationalism by the infection of revisionism are the ENEMIES of nationalism, for they know that nationalism + revisonism = social and political marginalisation.

If revisonism did not exist then the ADL, Searchlight and AIPAC would have to set up their own revisonist groups in order to infect nationalism and ensure it does not ever take power to threaten their own power.

The media has spent the last fifty years conditioning the masses into conflating nationalism with revisonism in order to ensure whenever a nationalist party arises in society they can be called nazis. This process works as nationalism has tolerated the presence of revisonists in its ranks who have then been used by the media to link the nationalist movement with the nazis and the holocaust.

NATIONALISTS WANT TO TAKE POWER - revisonists place their loyalty to revisonism above the process of taking power.
Posted by Defender of Liberty at 10:50

What I wonder, do these revisionists make of other people who were victims of the nazi holocaust, such as the gypsies, communists, slavs, christians and the disabled and the mentally ill?

Holocaust Against The Disabled

And speaking of slavs, would these revisionists also deny the Croat holocuast against not only the Jews but Christian Serbs too at the notorious Jasenovac camp:

Then there is the Mulsim involvement in the holocaust:

Would they also deny the use of East European slave labout extensively used in camps and sites to build the V1 and V2 rockets? Von Braun's own words:

How far does this folly stretch? We really don't need these asinine Nazi sympathizers and Jew haters in our party. Good riddance.