The Milner Group, the Balfour Declaration and WW2 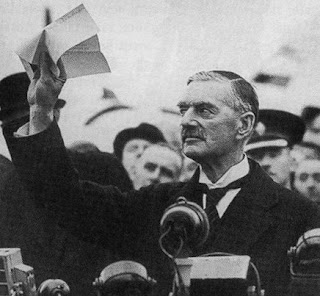 In response to the comments from Bert Rustle on the Fall of Rome and the new book from Patrick Buchanan, the quotes below come from the book The Anglo-American Estalishment by Caroll Quigley , and it demonstrates the arrogance and insanity of the political Establishment in the lead up to WW2 and their duplicity in the issue of Palestine ;

This event of March 1936, by which Hitler remilitarized the Rhineland, was the most crucial event in the whole history of appeasement. So long as the territory west of the Rhine and a strip fifty kilometers wide on the east bank of the river were demilitarized, as provided in the Treaty of Versailles and the Locarno Pacts, Hitler would never have dared to move against Austria, Czechoslovakia, and Poland. He would not have dared because, with western Germany unfortified and denuded of German soldiers, France could have easily driven into the Ruhr industrial area and crippled Germany so that it would be impossible to go eastward. And by this date, certain members of the Milner Group and of the British Conservative government had reached the fantastic idea that they could kill two birds with one stone by setting Germany and Russia against one another in Eastern Europe. In this way they felt that the two enemies would stalemate one another, or that Germany would become satisfied with the oil of Rumania and the wheat of the Ukraine. It never occurred to anyone in a responsible position that Germany and Russia might make common cause, even temporarily, against the West. Even less did it occur to them that Russia might beat Germany and thus open all Central Europe to Bolshevism.

In his posthumously published 1982 book The Anglo-American Establishment, Carroll Quigley, Ph.D. in history from Harvard and a professor of history at Georgetown, revealed that the Balfour Declaration was actually drafted by Lord Alfred Milner, who was the head of the Rhodes-Milner Round Table Groups that Cecil Rhodes called for in his will to be "Churches for the extension of the British Empire." Milner was the trustee of Rhodes' will and both Milner and Rhodes were self-described British race-patriots.

The recipient of the Balfour Declaration, Lord Rothschild, was also a close friend of Rhodes and was at an earlier time the trustee of Rhodes' will. Here is what Quigley wrote:

"This declaration, which is always known as the Balfour Declaration, should rather be called 'the Milner Declaration,' since Milner was the actual draftsman and was apparently, its chief supporter in the War Cabinet. This fact was not made public until 21 July 1936. At that time Ormsby-Gore, speaking for the government in Commons, said, 'The draft as originally put up by Lord Balfour was not the final draft approved by the War Cabinet. The particular draft assented to by the War Cabinet and afterwards by the Allied Governments and by the United States. . .and finally embodied in the Mandate, happens to have been drafted by Lord Milner. The actual final draft had to be issued in the name of the Foreign Secretary, but the actual draftsman was Lord Milner."

Note how history still calls this declaration the Balfour Declaration and how the big lie persists and perpetuates itself through history.

History is propaganda.
Posted by Defender of Liberty at 04:04

The names Quigley or Milner do not appear in the index or as first author in the references. Conspiracy or cock-up?

Type in Caroll Quigley and look on Wikkipedia it lists the book as by Quigley under that ISBN.

It appears consipracy may be correct.