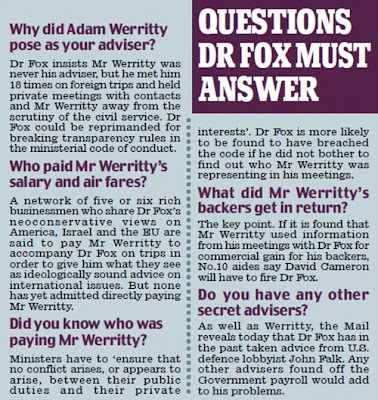 
Senior Tories predicted Liam Fox will have to resign after further details emerged about the tycoons who paid for his close friend Adam Werritty to follow him around the world.

The Defence Secretary’s position was described by sources as ‘increasingly untenable’ after it emerged that the costs of Mr Werritty’s jet set lifestyle were paid by a corporate intelligence company and a billionaire who lobbies for Israel.

Some £147,000 was paid into the bank account of Pargav Ltd, a not-for-profit company set up by Dr Fox’s self-styled adviser, to cover the costs of first class air travel and top hotels.

Details of Pargav’s accounts, revealed last night by the Times, show that a similar amount was paid out to fund Mr Werritty’s expenses.

A further £50,000 was also transferred into the accounts of two other companies linked to Mr Werritty.

In new damaging revelations today, it emerged that a shadowy defence lobbyist also acted as his unofficial ‘adviser’.

John Falk, a U.S. consultant who has raked in tens of thousands of dollars advising firms how to win military and security contracts.

Amid fresh calls for the Defence Secretary to resign, it emerged:

Dr Fox did not declare that he had attended a £320-per-head ($500) dinner in Washington with senior figures from the defence industry and Mr Werritty.

A senior regulator called for a charity set up by the minister to promote the U.S. 'special relationship' to be re-investigated after it was wound up.
The Defence Secretary apparently defied official policy as he helped set-up a private investment firm in Sri Lanka last summer. The Government has dissociated itself from the state amid allegations of war crimes.

The Mail has learned that a Tory whip told a senior Labour MP that Dr Fox would have to quit when the results of an inquiry by Cabinet Secretary Sir Gus O’Donnell are released early next week. The Tory, who is close to Downing Street, told his friend: ‘You will get your scalp.’

Dr Fox is under fire because he met Mr Werritty on 18 different foreign visits over the last 16 months – raising questions about who his best man and former flat mate was acting for in their private meetings.


The accounts show that Mr Werritty’s backers included six people or companies who paid up to £35,000 each to Pargav.

Posted by Defender of Liberty at 01:49