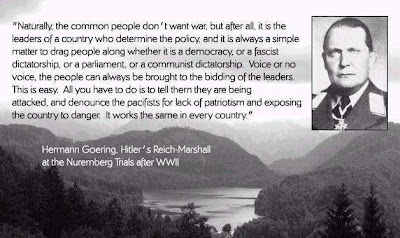 An interesting article on the BNP site here about Ed Balls telling lies about a 'threat to Britain from right wing extremists ;


This is obviously typical New Labour state propaganda of the farcical Dodgy Dossier 'and 'Saddam has 45 minute WDM missiles' type we so often heard farted from the arse end of Alistair Campbell in his role as Chief Lie Master of the propaganda department of the government.

This is a criminal waste of money.

How many hospitals, homes and jobs for British workers does that money represent !

An analysis of the Whitehall communications machine found Labour spent £338 million a year on 3,252 spin doctors and press officers - three times as many as 10 years ago.

Downing Street has seen its press team swell from seven staff under the Conservatives to 23.


Yet the Labour government still has to depend on spreading total, and farcical, bullshit in order to buttress its support amongst the media conditioned sheeple - and then the media arm of the Tory Party, Daily Mail, Telegraph, Times etc goes and reveals it is bullshit, or the BNP do an investigation and proves it is bullshit.

Yet things are even worse than this.

This week Section 75 of the Counter Terrorism Act 2008 came into effect which creates a new category of terrorism - this being terrorism undertaken in the name of a racial cause.

It appears that the aim of this New Labour spin about a threat from right wing extremists is being used to advance a case for the inculsion of this revised version of terrorism in the act.

But how will this new definition of terrorism be defined ?


Or will it be used solely to set up state run groups that set out to snare and entrap naieve and impressionable young white kids into joining extremist right wing groups and then inciting them to acts of violence - which are then 'intercepted' at opportune times for the government to publicise in order to manipulate the media and the masses.

I think we know the answer to that.

We have seen this bullshit time after time in Northern Ireland and in the 1980's with Column 88 and Red Action.


Whenever any unpopular government is in the shit it starts the same dreary and predictable ' problem - reaction - solution ' process time after time.

The re-definition of terrorism was designed to allow sections of British state security to be ordered, not asked, advised or consulted, by minions of the Labour government to infiltrate and destabilise right wing groups.

By defining a racial form of terrorism, the government can then order the police and other state agencies to treat those groups as terrorist it alone defines as terrorist groups.

Therefore the true motivation for this bullshit from the government has a political goal - the eventual banning of political organisations.

Therefore one can now expect the same sort of false flag operations as seen on 911 and in Iraq.

Heres how it will play out.

State extremists will infiltrate both far right and far left groups. So called 'Hardcore Nationalists and Leftists' will demand a return to street violence and confronting the reds / nazis. Kids with no brains will join those groups and be fed extremist bullshit whilst being ripped off for as much cash as possible.

The state extremists will send their brainwashed and gullible kids to go out and attacks members of the reds / nazis.

At the same time the state security services will be filming them, monitoring their phone calls, etc etc and at the right moment they will attack an individual (with the intent of creating a chain reaction situation of tit for tat reprisal attacks) with the MI5, SB and Terrorist Squad all watching and filming.

The government will need to set up various 'false flag' operations in order to justify its removal of democratic freedoms and to use its powers such as under the Civil Contingencies Act.

Therefore it will need many patsies set up in order to do this.

Watch out for the state Marxist who demands direct action by AFA thugs against the 'Nazis' and beware the Far Rught Fuhrer who wants his followers to 'take the fight to the reds and the Muslims'.

Both are the State.

Posted by Defender of Liberty at 10:38

If ever there was an ' i told you so' post, then this is it. Please keep this post Lee and display it again when your scenario comes to actual fruition.
The chance of this happening doesn't seem that far away now. Day by day the Government and their associates in the media are trying to destroy the Party's credibility. It has and it will fail again, as long as we stay on our guard and nobody gets sucked in to the poker game you describe above. Brilliant stuff mate.

You can always tell a state infiltrator or plant. They like to use inflammatory language, of a kind Prine Harry is familiar with. They are the ones who call for " street action" and set up aggressive websites. They snare and entrap the young and the naive; beware of them. Power will come by the will of the people and the BNP must be a reflection of our nation.

we will win by the will of the people, by our professionalism and by the patriotism we show in daily life.
everything must be sacrificed for the good of the party, for our families, for England and by the help of God we will win.
Death before dishonour, this is our time to win, our enemies are in chaos and the will of the people is with us, integrity must be our watchword vote on june 4th