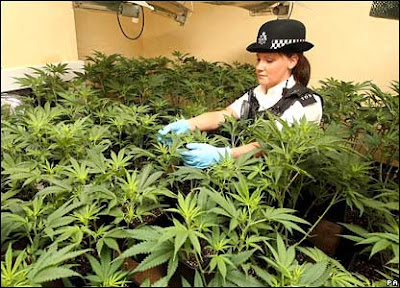 Image - ' Youre Nicked ! Best you come quietly sonny ' - The image that fully captures the absurdity of criminalising a plant.

What you will discover if you follow the links below may save your life.


I invite you to go on a journey of discovery, but if you decide not to take the first step is down to you.


Now you can watch a video about how this herb can cure cancer here ;


When you watch that you can now watch a Youtube video with Mary Beth Augustine, RD,CDN, who gives a detailed explanation of the known scientific curative properties of that natural substance.


The miracle of Hemp Oil is one well known by scientists ;

The uses of hemp are well known by scientists and industrialists ;


There are not just two sides to the drugs debate on cannabis, these being Prohibition and Decriminalisation.


There is a third option - Regulation.

This means medicinal cannabis can be legally grown by farmers or licensed users, it can be taxed, prescribed, purchased from licensed pharmacists, quality controlled, its use tightly regulated and people with chronic illnesses do not have to be thrown into prison for self medicating themselves.

The collapse of the present economic, financial and industrial system is a historic opportunity to escape the control of the present globalist political and corporate elites. It these elites that have profited from prohibition. The laws that prohibit the use of cannabis as a medicine were imposed precisely so that the international corporations could profit from treating disease, not preventing disease.

Cannabis is a plant that prevents disease, but as a plant it cannot be patented.

Drugs that treat disease which are created in laboratories can be patented, and this is why patented drugs are ’legal’ whilst herb like cannabis which grow wild in nature are ’illegal’.

The fact that cannabis prevents disease means the more people that use cannabis as a medicine and in a preventive manner, equates to less victims of disease and therefore less profits for the drugs companies.

Hemp as a medicine, hemp as a product used in manufacturing product, as a bio-fuel, as the basis of a whole new economic sector has the basis to kick start the national economy of any country with the guts and brains to undertake the Hemp Revolution.

The Hemp Revolution would produce a staggering amount of national income from any nation that changed its laws to embrace hemp as a legitimate and regulated commodity in the market place.

In the United States alone the estimated amount of money spent each year on illegal cannabis in the black market is 7 billion dollars.

The federal government spends $19.2 billion every year in fighting the war on drugs.

State governments combined spend $77.8 billion every year in this effort.

Conservatively estimated, 20 percent of the government's war on drugs expenditures goes toward marijuana. Assuming that Washington state spends one-fiftieth of the states' combined expenditure, this means the US spend somewhere around $300 million a year just to fight marijuana.


I believe that Britain should stop being a poodle of the failed US ’War On Terror’, and I also believe we should abandon the failed creedo of the US ’War on Drugs’ which has also failed in a similarly spectacular fashion.

A new paradigm is required as the old ’Just Say No’ approach has not worked.

Regulation is the answer.

Create a strict regulatory regime for its production, license its use and sale, allow doctors to prescribe it and utilise its many industrial uses.

Take the money out of the hands of the gangsters and transform it into legitimate taxable income and use the money gained from its growth, sale and profits to fund the NHS.

Posted by Defender of Liberty at 13:47

Having some health issues myself and was thinking of your article, you know it might be worth a try.

Normally I avoid all drugs where possible and that means ALL legal or otherwise, but I think some of the claims for this drug are rather special and seem to be backed up with proof at least to some degree.

however my family has a long history of mental illness and i only ever tried the drug twice many decades ago, first time i simply fell asleep, second time i had paranoia which lasted for several days, induced by the drug, that was pretty scary.

also not being a smoker i would rather eat it and not have to get it from some dodgy herberts?

and without jumping through countless doctors hoops it leaves most of us in the real world with a problem when wanting to try this as a medicine only.

how can you eat it without destrying it and how much would you eat?

but i see where you are coming from and this needs to be looked into as you say if their is no money in it then no one will back it in the halls of power.

The problem with the modern strains of marijuana that seems to a big issue with people with illnesses if you read their comments on various internet sites is the strength of the skunk variety that is sold in Britain.

It is simply too strong.

I would suggest that as you have had mental health issues in your family, and have experienced a negative response in the past, is that you are best of not trying it at all.

I would suggest as an alternative Hemp Oil from any good alternative health shop - which doesnt have the psychoactive ingredients in it like THC.

The problem though is that the THC and CBD in the illegal varities is what seems to be the basis of its curative and beneficial health effects.

If you must try it then I would think that whatever you decide to do, and I am not advocating that you break the law in any way, that you then start with a very, very, very small amount taken by being blended in say a chocolate or milkshake and then see how you get on with it.

Then gradually raise the dose level.

I am not advocating anyone breaking the law, but people in pain I believe have the right to decide for themselves what assists them with their chronic medical conditions.

My cancer specialist advised me to smoke it when I was having chemotherapy as it helped reduce neausea and improve my appetite, so medical proffessionals know it can help some people greatly.

Hi Lee, thank you kindly for your quick reply and comments to this older post, your personal posts on such matters mean a lot to me and lead me to do some research on something I would otherwise have missed.

Hope you get better soon.

If you need advice let me know,