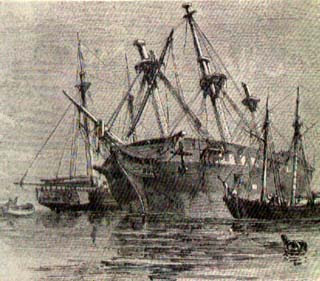 The breaking wave is here, now only the rocks await,
Slick with green sea slime and disaster, brooding,
Black, crowned with wracks of weed and coral,
Beneath the storm snarling waters, the foaming maw
Seeks to suck the fragile furrower down into its depths,
Where rocks gather in their packs to trap the harvest,
Of creaking oak decking and wind shrieking squall,
The fruits of the sea and all its sacred offerings,
Are delivered in white swaddlings of sail as a sacrifice,
By the obedient legions of the waves, the timber rippers,
To the furies in their white water robes, savage bitches,
Who reap the grim cargo of all lost souls, the drowning crew,
Cast forth from the dying ship, to become sea bloat dead,
That the fates then wash up upon the haunted sands,
The raging realm of spume and foam, the final shore,
Where sea wolves roam the moon shine wilderness,
Their black beards rimed with sea salt, crystal crusts,
Uttering dark curses through cutlass slash smiles,
They light their lanterns to misdirect the lonely ship ,
Whenever a drunken sea mist rolls in upon a rising tide,
Snagging and snarling the savage surf, to lure in the lost,
They drive those doomed ships to their cruel death,
Upon the barbarous altars of the bleak shoreline itself,
For in that froth of maddened waters, reddened with blood,
The ravening spittle, spat into the face of sky, chokes
The final breath, as drowning men are denied a last prayer,
When salty fingers of sea invade their drowning throats,
Reflecting that eternal war of man and nature,
Of man against man, of wolves against wolves,
That life set into motion, as all against the other,
For man is wolf to man, both saviour and slayer, and so the sea
Which will steals its prize, as death isdiscerned weeping with joy,
Beneath a starless sky, the hunters moon enjoys the kill,
As red crabs scuttle, stripping away the flesh,
Their claws clutching at snippets of soft white skin,
That flutter as a shredded sail in the ebb and flow,
The wreckers walk amidst the flotsam of lost souls,
Tearing gold rings from the fingers of the dead,
The carrion eaters gather up their golden meats,
Then flee the scene of their crimes, as wolves from the fold,
To hide in the undercurrents, where they gloat,
And profit in secret from all their many crimes,
Until the final judgement and the soul finally reflects itself,
Darkly, revealed as through the lens of its every evil.

Posted by Defender of Liberty at 03:18