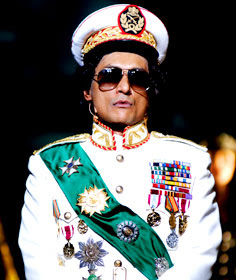 Nick Griffin has been so inspired by the defiance of Colonel Gaddafi amidst the revolution in Libya that last night he gave a speech to the assembled masses of his supporters in the BNP, who were forced to attend before he paid them their staff pay.


Wearing his new gaddafi sytyle BNP uniform of a white smock, trousers and more medals than Michael Jackson and Colonel Gaddafi combined, that Nick had awarded himself for his bravery and courage in Pie Eating, Dodgy Accounting and Nepotism, he addressed the crowds of sheep outside his new bunker in welshpool ( as it is known for BNP accounting purposes), or the spa as it is known in the real world ;

Just like my hero Colonel Gaddafi I too shall never resign from the BNP.

I will be a martyr for nepotism and croneyism until the end, death to the pig dogs who defy my will and the orders of my well paid employees !

In the last few weeks I have shown the whole world that I am not a man to be trifled with - as the Green Maggot found out to his cost when he dared defy my will. Now he hides in his caravan molesting sheep whilst dodging my assassions such as Ian Kitchens wife and her voracious vagina !

Eddy, I spit on his name, Butler is the devil with a micro penis !

Nick ' oooh look how tall, fit and handsome I am' Cass, a curse upon his name, will be made to eat doughnuts until he is fatter than me - how dare he mock me for being a short, fat, useless twat !

The BNP is the NICK GRIFFIN PARTY, yes I know that if that was literaly true the BNP would be known as NGP, but you get the point.

I will return now to my lair in Brussels with the other MI5 run operatives in UKIP and make millions whilst pretending to oppose the EU !

With my loyal officers in the UK, whose wages I pay based on their brownnosing ability not ability to do the job, I am sure we are only a week or a fortnight or so from taking power and running Britain.

Please do not forget to donate to the BNP.

Make cheques out to C.ASH who is our new treasurer.

Posted by Defender of Liberty at 00:31

You have a very twisted sense of humour Mr Barnes.

Death before Resignation, all he has to do is riot.

EU has a Death Penalty


Your thoughts on the accuracy of this Lee.

Listen Barnsie, This is you very much not a commie Nicholeivitch here. Wind up your crap now or come the revolution I will do nothing whatsover to you. Doing nothing whatsover is my new deadly plan. Putting up candidates who have not a hope in hell of winning is my new and fiendishly clever ploy. Making the BNP a non-force in British politics is a stategy no great political thinker has ever thought of before. Gramschi gives me a hard-on and Mosely is my wet dream, how can I swing for one side or another? It's so hard to want to be Stalin and Mussolini at the same time. Someone recently said they thought of me as being a Thatcherite. I however dont 'think' who I am, I KNOW who I am; totally irrelevant.
Nick. (ps. you left a pair of socks in the office).