The Spirals of Life 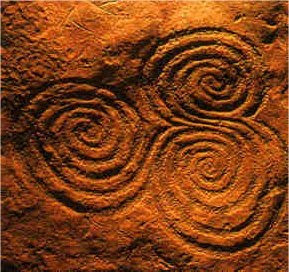 For a few weeks I have been working on an attempt to analyse the meaning of the triple spiral symbol in the pre-Celtic religion of the Neolithic.

I think I have cracked it.

The three spirals represent the moment of life evolving, when the DNA replicates itself and splits from one spiral into three spirals.

Nowhere else in nature, but in the process of DNA replication, are three spirals linked as one. The fact that Newgrange and other Neolithic sites are sites of the dead, and hence linked with life, shows us that the linkage between the three spirals symbol and the life and death process is not just accidental.

The three spirals motif is the symbolic depiction of the creative and evolving life process that the monuments themselves also seek to represent.

Therefore for people to say the symbol of the triple spirals does not represent DNA, and the moment of life evolving and growing during cell replication, is absurd. Only in one place in the whole of nature do three spirals interlock and that is as a result of the process of life.

The religions base was the Island of Orkney and the Newgrange tomb in Ireland.

This means Britain was an Empire in the Neolithic - the Empire of the Stones.


In order for the symbol to mean the three spirals then the rest of the symbolism associated with the triple spiral must fit.


For instance the image at the top is taken from within Newgrange tomb.

1) A human cell - in that the location where the symbol of the three spirals is located within the structure is also the physical location inside a human cell where the DNA replication takes place.

3) A place of spiritual evolution - where the bones or remains of the dead are stored in a special bowl where the sun on the winter solstice shines and allows the spirit of the dead to be reborn in the otherworld.


Therefore on each level the symbolism of the spirals represents life and higher evolution.


Yet again it appears that the ancients knew as much about the nature of reality with their spiritual insights as we do with our scientific instruments.

Posted by Defender of Liberty at 02:26

The English are the true Celts

The British; being the Welsh, The Scots, The Irish and the English are the true Celts.
When Rome, the administrators invaded, they simply installed institutions and Goverment infastructure, then the vast majority of "little" Romans left.Just like they have in Iraq.