The Spirals of Fertility 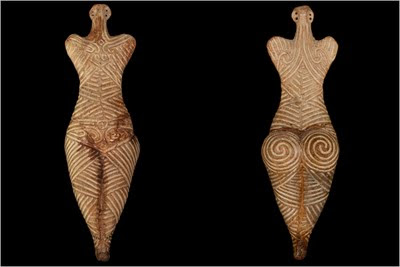 Image - spirals highlighting the womb region of Neolithic sculpture. Sculptures unearthed from the Cucuteni Culture of Eastern Europe circa 4000 B.C.E. which would be part of the Indo-European Empire of the Stones that stretched from Orkney to ancient Egypt and India.

Found this interesting article below on spirals in Neolithic art and symbolism.

The triple spiral symbol is linked with the female reproductive system.

The Neolithic Venus statues have specific sections of the status highlighted with spirals, which is the womb region.

Therefore the spirals are designed to suggest a specific part of the body - where we find the specific action linked with DNA, reproduction and cell division, is driven by the three spirals of the DNA helix at work.

So yet again we see the link between the female menstrual cycle, fertility and reproduction and the triple spirals symbol.

The triple spiral symbol represents meiosis and mitosis - and also the transition of the soul from this world to the Otherworld.

The triple spiral represents life at all stages from creation to existence to reproduction to rebirth in the spiritual world after death.

But the triple spiral also has direct connections to the physical structure of the female body, and hence the symbology of the connection to the spiral and the womb and fertility is further reinforced.


" Each month of a woman’s fertile phase, the ovaries, upon prompting from the pituitary gland’s follicle stimulating hormone (FSH) begin to prepare about twenty cells, eventually ending up with one chosen ripe egg out of one chosen ripe follicle. The cell within the follicle that will become an egg is called an oocyte (oh-a-cyte). The is the largest cell in the human body. It is visible to the human eye and is called the “secondary oocyte.”

There are two forms of cell division, mitosis and meiosis. These two forms of cell division are responsible for the presence of life on this planet. In this process DNA gets copied and stored. The process of mitosis is a cell making an identical copy of itself. This goes on everywhere, in our bodies, in plants and bacteria. The process of meiosis is different because it involves a sex cell that divides its chromosomes in half so it can mix or share DNA with another cell during reproduction. These are called germ cells. Out of this process emerges an entirely new being. "

The uterus is the most underappreciated body part on the planet! Women are completely out of touch with this fantastic organ. For example, how many people know that the human uterus possesses three spiral arteries? These are the only spiral arteries in the body. Remember a spiral is always a vortex! Triple Torsion power!

These spiral arteries in the uterus are responsible for a woman’s monthly bleeding. It is their coiling and uncoiling which orchestrate the release of the endometrium. They are extremely sensitive to estrogen and progesterone. During each menstrual cycle, these spiraling arteries grow and stretch with the endometrium.

The first half of the cycle is a coiling up, a tightening, a squeezing. When the arteries uncoil and relax, a woman experiences bleeding. These spiral arteries are coiled most tightly right before the bleeding. This is what causes PMS, that time of painful suspension between restrictive gripping and letting go. The menstrual cycle is a monthly spiraling, a cyclic coiling and uncoiling, tightening and loosening, an involution/evolution, a spiral dance in rhythm with the moon. It is not a passive sloughing off of a build up. It is an active cycle that repeats every 28 days, according to this triple vortex energy of the uterus.

Many sculptures of the female form unearthed from the Neolithic period in Europe have spirals incised over the womb space. Some have one on the back of each hip, where the ovaries are located, others have one spiral over the exact womb space in the front. It is as though ancient people understood that spiraling action is necessary for the generation of new life, and that this energy was held within the female womb.

Sculptures unearthed from the Cucuteni Culture of Eastern Europe circa 4000 B.C.E.

A triple spiral is the ultimate spiral, the height of the creative form. The triple spiral arteries show that the ultimate form of creativity lives at the womb of women. This is not only available for women to make babies. Indeed, women bleed in the cycles when they are not pregnant, which means each month they grow the spirals longer, experience this coiling and uncoiling, carry this creativity within all the time. And what are the spiral arteries up to when a woman no longer bleeds? Women are continually spiraling with creativity at their cores.

Posted by Defender of Liberty at 08:40