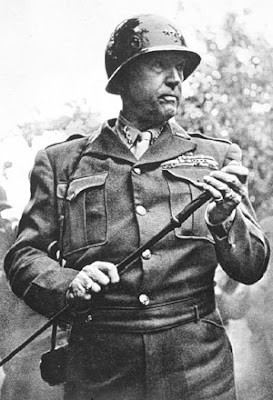 George S. Patton, America's greatest combat general of the Second World War, was assassinated after the conflict with the connivance of US leaders, according to a new book.

'We've got a terrible situation with this great patriot, he's out of control and we must save him from himself'. The OSS head General did not trust Patton
The newly unearthed diaries of a colourful assassin for the wartime Office of Strategic Services (OSS), the forerunner of the CIA, reveal that American spy chiefs wanted Patton dead because he was threatening to expose allied collusion with the Russians that cost American lives.

The death of General Patton in December 1945, is one of the enduring mysteries of the war era. Although he had suffered serious injuries in a car crash in Manheim, he was thought to be recovering and was on the verge of flying home.

His book, "Target Patton", contains interviews with Mr Bazata, who died in 1999, and extracts from his diaries, detailing how he staged the car crash by getting a troop truck to plough into Patton's Cadillac and then shot the general with a low-velocity projectile, which broke his neck while his fellow passengers escaped without a scratch.

Mr Bazata also suggested that when Patton began to recover from his injuries, US officials turned a blind eye as agents of the NKVD, the forerunner of the KGB, poisoned the general.

Mr Wilcox told The Sunday Telegraph that when he spoke to Mr Bazata: "He was struggling with himself, all these killings he had done. He confessed to me that he had caused the accident, that he was ordered to do so by Wild Bill Donovan.

"Donovan told him: 'We've got a terrible situation with this great patriot, he's out of control and we must save him from himself and from ruining everything the allies have done.' I believe Douglas Bazata. He's a sterling guy."

Mr Bazata led an extraordinary life. He was a member of the Jedburghs, the elite unit who parachuted into France to help organise the Resistance in the run up to D-Day in 1944. He earned four purple hearts, a Distinguished Service Cross and the French Croix de Guerre three times over for his efforts.

After the war he became a celebrated artist who enjoyed the patronage of Princess Grace of Monaco and the Duke and Duchess of Windsor.

He was friends with Salvador Dali, who painted a portrait of Bazata as Don Quixote.

He ended his career as an aide to President Ronald Reagan's Navy Secretary John Lehman, a member of the 9/11 Commission and adviser to John McCain's presidential campaign.

Mr Wilcox also tracked down and interviewed Stephen Skubik, an officer in the Counter-Intelligence Corps of the US Army, who said he learnt that Patton was on Stalin's death list. Skubik repeatedly alerted Donovan, who simply had him sent back to the US.

"You have two strong witnesses here," Mr Wilcox said. "The evidence is that the Russians finished the job."

The scenario sounds far fetched but Mr Wilcox has assembled a compelling case that US officials had something to hide. At least five documents relating to the car accident have been removed from US archives.

The driver of the truck was whisked away to London before he could be questioned and no autopsy was performed on Patton's body.

With the help of a Cadillac expert from Detroit, Mr Wilcox has proved that the car on display in the Patton museum at Fort Knox is not the one Patton was driving.

"That is a cover-up," Mr Wilcox said.

George Patton, a dynamic controversialist who wore pearl handled revolvers on each hip and was the subject of an Oscar winning film starring George C. Scott, commanded the US 3rd Army, which cut a swathe through France after D-Day.

But his ambition to get to Berlin before Soviet forces was thwarted by supreme allied commander Dwight D. Eisenhower, who gave Patton's petrol supplies to the more cautious British General Bernard Montgomery.

Patton, who distrusted the Russians, believed Eisenhower wrongly prevented him closing the so-called Falaise Gap in the autumn of 1944, allowing hundreds of thousands of German troops to escape to fight again,. This led to the deaths of thousands of Americans during their winter counter-offensive that became known as the Battle of the Bulge.

In order to placate Stalin, the 3rd Army was also ordered to a halt as it reached the German border and was prevented from seizing either Berlin or Prague, moves that could have prevented Soviet domination of Eastern Europe after the war.

Mr Wilcox told The Sunday Telegraph: "Patton was going to resign from the Army. He wanted to go to war with the Russians. The administration thought he was nuts.

"He also knew secrets of the war which would have ruined careers.

I don't think Dwight Eisenhower would ever have been elected president if Patton had lived to say the things he wanted to say." Mr Wilcox added: "I think there's enough evidence here that if I were to go to a grand jury I could probably get an indictment, but perhaps not a conviction."

Charles Province, President of the George S. Patton Historical Society, said he hopes the book will lead to definitive proof of the plot being uncovered. He said: "There were a lot of people who were pretty damn glad that Patton died. He was going to really open the door on a lot of things that they screwed up over there."

Posted by Defender of Liberty at 08:08

I can imagine the majority of "rational" cynics wh will simply yawn and muter "yet another conspiracy theory" as if that term was merely a mocking insult.

Yet it is they who are the idiots who refuse to examine evidence. Where such evidence is lacking, or refuses to stand up to examination, it should be rejected and another theory held up over the so-called "conspiracy theory".

But these conspiracy events DO go on and if we bear in mind that a conspiracy is simply two or more individuals who are planning something in secret than we will realise that they are far more common than we give credence to.

The Patton Accident, if it can be proven to be the verifiable truth (and the evidence collected so far is of high-quality), shows the lengths at which our governing elietw ill go to preserving its goals and its existence. So much for war heroes.

If Patton had been given free rein the West could have prevented the Cold War and pushed back Communism from Europe, giving freedom to the Eastern European satellite states, preveted a Cold War build-up of nuclear weaponry and their immense costs, stopped the hundreds of wards that were fought throughout the world, often fought as proxy wars; and stopped the 1949 Chinese Communist Revolution. Millions of lives would have been saved from both the man-made famine and genocide and mass murders of Stalinist Russia and millions more yet from Chinese and Camboian Communism (Mao Tse Tung and Pol Pot respectively). The West would have also been stronger since the Left would have had no financial or political support from the USSR, no example to follow and no moral backing to elad their crusade against the West and its institutions. Political Cortrectness and the slow Death of the West would have been less in evidence had Soviet Communism fell in the 1940s.

This conspiracy should be invetsigated by the US Government and admitted as such. Those who were instrumental in his death and cover-up face the fact that they were indirectly responsible for millions of deaths.

Regarding the Falaise Gap however, it maust be taken into issue that this battle in 1944 was far more compecx than has been made out. The Germans fought ferociously and were adept at fighting tactically in self-created battle groups. The slowness in closing the Falaise Gap owes as much to the timid attaitude of General Montogomery who was cautious in wasting the lives of the men under his command.

A book called Blood and Guts Patton by Jack Pearl, published 1961, sets out Patton's attempt to initiate a war against the Russians and enlist the help of surviving Wehrmacht veterans.

I have read elsewhere of his assassination (a film was actually based on this theme). Heinous as it was, it probably isn't surprising.

Of the Falaise gap, one eye-witness account (from The 59th Division - Its War Story by Peter Knight, p 89) states "In the most impossible places tanks, guns, vehicles, horses and humans were found; and in the most unlikely areas the heaviest devastation had been wrought. Nowhere appeared capable of hiding this army in retreat, no wood was thick enough to escape the incessant pounding from bomb and cannon shell and no route, however unusual, proved completely successful."

Amazing that 50,000 Germans managed to get through to fight another day.