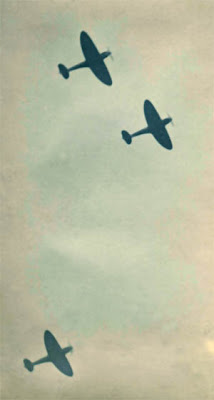 This is a poem about the Second World War in Kent. The lines at the start of the fourth stanza relate to the attack on houses in Strood opposite the train station where my father lived. He was pulled out of the rubble and lost his sister and two cousins who lived next door to him.

Hellfire Corner is the name of my area in Kent area during the war.


My aunt Valerie still remembers,
The days of dogfights over Kent,
Long balmy nights of doodlebugs,
Red skies at night from sinister sunsets,
Aglow between verdant hop vines,
As London lay burning in the West,
Stuka swarms that scored the sky,
The engine scream of Iron Eagles,
Whose black flocks were flying forth,
Strafing and bombing all roads that ran,
Along the silver ribbons of river,
The Thames and Medway into Kent,
Hedgehopping along the coast,
Until deep within their trap,
The raptors slip raging from their mews,
Then rise to stoop and mantle,
Spitfires mauling the silver machines
Bullets break in the thin skin,
The cages of burning steel release,
A silken puff of sycamore seed,
That becomes a pappus of white,
As pilots drift gently to earth,
Upon delicate dandelion clocks,
As the roar of Merlin engines,
Were loping like lions overhead.


HMS Ajax lay in Chatham Docks,
Licking the wounds of the River Plate,
Then from a dismal Medway fog,
A 210 bomber came swooping down,
All her machine guns were blazing,
With the hell fury of rapid fire,
The shriek of bombs unleashed,
Echoed along the Medway flats,
Three fell into the burning river,
One in the mud beside the boat,
No casualties reported, only minor damage.


June 6th 1944 out of a drowsy sky,
Came wave after wave of bombers,
Washing over Gillingham and Chatham.
On their way to the D-Day beaches,
Then from above the sound of catastrophe,
Two B-26 Marauders crabbing,
Their wings crossed in flight,
Fell in flames upon the roofs of houses,
In Corporation Street and in Rainham,
The bodies of burnt crew members,
Were trapped within the cockpit,
Laying amidst the red and white roses,
Of suburban gardens in summer bloom.


A bomb was dropped in Darnley Road,
And three children were lost in Strood,
In two houses opposite the train station,
A stray bomb fell and blew them all away,
Child victims of the Baedeker Blitz,
The simple targets of Total War,
The white horses that pulled the carts,
Which the council had sent to collect,
The remains and remnants of the dead,
Wore black hoods over their heads,
So that they could not see the flames,
That still flickered amidst the rubble,
As the light of young lives went out,
In corners too deep for the fire crew to dig,
Whilst on the other side of the road,
A young boy stood on the platform selling papers,
Whose front page carried a photograph,
Of a little girl shot in the back,
Laying dead in a country lane,
She ran when she should have stayed,
Killed with the twitch of a trigger finger,
By a German pilot in a killing rage.

Posted by Defender of Liberty at 12:41

Although not as well crafted as other poems I really liked this one for both its descriptive value and its historicity.

The fact that it relates to our recent history ( which is being erased by Political Correctness) and to your own family gives this work a poignacy and hard-hitting strength that it would not otherwise have.

A great tribute to your family and to thos who lived and died on the Home Front during World War Two.

On a slightly different note it is interesting that Strood was known as "Hell Fire Corner" during the War. Other places in Kent, due to its proximity to Occupied France, were also known as this, most notably the area around the two big Channel guns at Dover which pounded the French Channel coast and which in their turn received poundings from their counterparts in Occupied France. There were so many shells that fell in that part of Kent due to this that this area became known as "Hell Fire Corner".

Two of these Dover guns were named Winnie and Pooh.

On September 29, 1944, the 3rd Canadian Division, supported by RAF bombers, elements of the British 79th Specialised Armoured Division ('Hobo's Funnies') and W and P captured the giant Channel batteries at Cape Gris Nez and Sangatte, mounting 16-inch guns. Minesweepers from the Dover Patrol began clearing the fairways into Boulongne. Dover and other Kentish towns as far inland as Maidstone slept soundly for the first time in four years.

We should never forget. Others will or would never give the proverbial tinker's cuss in the first place.

But the re-capture of the Channel Ports in September 1944 is an outstanding example of British and Old Dominion greatness. The Americans couldn't have done it - they didn't have anything like 79th Armoured, which is partly why they suffered such terrible losses at Omaha Beach on June 6th, 1944, thanks to General Bradley's refusal of Montgomery's offer of support from General Hobart's division.

I bet this isn't taught to white British school children either.