Shadows In The Maize 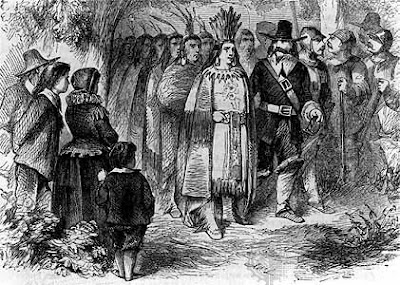 I woke up this morning with the phrase ' Shadows in the maize' in my mind and then wrote this poem about the Wampanoag indians and the Puritan settlers.

Shadows In The Maize.


There are shadows in the maize,
And dark spirits in the fields,
As ravens feast upon a cornhusk doll,
Three sisters wither in the sun,
Their pale roots slowly rotting,
Famine, plague and death their sons,
Are set free to rule the earth,
For the prophecy of Moshup,
Has come to pass upon the shore,
Beneath the cliffs of Marths‘s vineyard.


As first light lifts its golden head,
Where the wind and waves meet,
A Mayflower crowned with thorns,
Washes upon the weeping rocks,
And from wooden walls disgorges,
Strangers fleeing inner demons,
That they suckle with fresh sins,
Mather the Elder gives thanks for death,
As pestilence delivers up the land
From the savages that saved them.