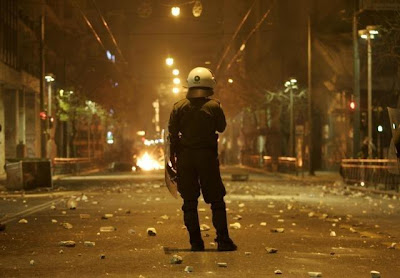 If you want to understand how multi-culturalism is starting to collapse, take a look at the fringes of Europe which are on the frontline of mass immigration.

Greece, the cradle of Western Civilisation, is a nation occupied by immigrant hordes.

They are attacking the Greek state for its refusal to allow them to claim citizenship in Greece. The Greek Anarchists and Communists are organising with the illegal immigrants and criminals to attack the Greek State.

As is usual in France, Belgium, Bradford, Oldham - these criminals rioting are called youth.

The fact they may be youths is irrelevant to what they really are - immigrants.

But at the head of this mob are the real enemies of Europe - the inner traitors of our kin and countries.

The riots in Greece are being led by the Greek anarchists and Communists who use the criminals and illegal immigrant armies on the streets of Greece as their footsoldiers.

The aim is not to bring down the State, as that would usher in the real enemy of the State, but simply to cause enough chaos so that the State may pass ever more new laws that criminalise any aspects of the rejection of the Liberal Consensus, Political Correctness and Multi-Culturalism.

Whilst the anarchists organise the riots, the immigrants provide the footsoldiers on the streets - but the real enemy are in the newspapers pumping out propaganda that eulogises the criinals and punishes the victims. The news papers that sell the system to the people and then pretend that is a 'free choice' and who elect parties who work for them. The lawyers who use the riots to bring in new laws to give citizenship rights to immigrants , the race relations shucksters who are awarded tens of millions of pounds to prevent 'communal tensions', the QUANGO's, the NGO's and the rest of the parasites of the Servile State.

The State will not, and cannot, enforce order.

In a liberal multi-cultural society the use of state power as physical force may only be applied against majorities and never against minorities.

The sanction of state violence is a tool in the armoury of the liberal society, only when it is the majority that are the revolutionary mass. When minorities rebel, according to liberal dogma, then majorities must surrender.

This is why the media, which is merely another arm of the corporate elite that controls politics via their funding of the political parties in governments, is sanctioned to attack the Greek people for defending themselves, whilst giving to the aggressors, the anarchists, communists and immigrants, the status of martyrs.

The media must attack the majority, for the role of the media is itself to maintain the rule of a minority - that minority being the liberal elite, the political puppets and the corporate parasites that control our societies.

The media is itself the primary component in the Tyranny Of The Minorities, for the printing presses and TV stations of this elite are the puppet strings that are pulled by the puppet masters.

At all times in our so called liberal societies the silent assassination of all those individuals and movements that are a challenge to the power of the system goes on all around us.

The system likes to SHOUT about its useful enemies such as Al Qaeda, for they are far away and useful for getting boots on the ground and access to oil wells. You can wage a lot of wars against phantoms.


This is why the media SHOUTS LOUDLY about Al Qaeda, as that way the political puppets of the liberal elite will be able to use the old ' Fear + Threat = surrender to authority" paradigm to pass new laws, such as restrictions on the right of free speech, to shut down the real threat to their power.

This is where we also hit the 'Chomskyite Paradox'.

This is the fact that when Noam Chomsky first analysed brilliantly the power structures of society in his Manufacturing Consent Theory the left / far left politics that he espoused in that theory as the antithesis of the system and that were to be regarded as the THREATS to the system, have now become PART OF THE SYSTEM.

Anarchism requires chaos to grow so the importation of immigrants increases social breakdown and forments anarchy, Liberalism is based on the universality of human rights and therefore denies the validity of national borders (yet ignores the fact that RIGHTS and LIBERTIES are different - rights may be universal but all liberty is local) whilst Communism is predicated on the International Society. Each regard nationalism as the antithesis of their existence, and therefore sanction the silent assassination of nationalism and nationalists in all our nations.

At the same time this unity of antipathy to the very concept of the national state ideal and the peoples state ideal, allows all three sisters to benefit from mass immigration.

They can use the radicalied immigrant masses for their own benefits, so as to forment social unrest and thereby allow the State to pass ever more restrictive laws, not against the anarchists and the criminals who are rioting, but against any Greeks who dare reveal that the Emperor has new clothes - those who dare stand up for Greece, stand up for the Greek people and who demand an end to mass immigration and the destruction of our nations and national cultures.

Chomsky analysed the problem, diagnosed the disease but offered the wrong cure.

The only cure to the sickness of our nations and societies is Nationalism.

The ONLY enemy that is despised by the Capitalist Right of the Tories and The Telegraph, by the Liberal cringing fops on The Independent and the Labour lickspittle lefties on The Guardian is the ideology of NATIONALISM.

It is our honour to be despised by all traitors and crooks.

The idea that a nation must be ruled by its own citizens, that democracy must rule over any tyranny of the minorities and that a small State that represents only the interests of its own citizens and their constitutional rights is a better instrument of Liberty than any bloated Banking Bolshevik State run by champagne socialist fools and fat cat capitalist crooks using public debt to grease the wheels of the Servile State - these are the fundamental nationalist positions that must be imposed in Greek society in order for Greece to survive as a nation and retain both its European racial and cultural heritage.

These riots in Greece are a symptom of the coming collapse of the entire European project of the Multi-Cultural ideology itself, from Greece to Ireland.

It is the nature of all Empires to collapse, for that which is created by Man must fall, as must Man himself.

Ideologies take root, they grow, bloom and then fade away and die.

Just as the Hunter Gatherer stage of Man gave way other forms of human social organisation, just as feudalism gave way to democracy, just as the Oil Age replaced the Coal Age - multi-culturalism itself, and the economic logic that sustained its brief appearance in Western Civilisation, are both now dead.

As a result of the Credit Crunch the economic logic, or insanity as it has now been revealed as, of mass immigration is now defunct.

Mass immigration into the UK, into a nation where the Financial Sector and the Services Industries were the primary employers, was always an idiotic idea.

Wages may have been kept low in the fat years and inflation kept down, but in the event of an economic downturn the immigrants simply become economic liabilities.

Government must begin to remove these people from the nation right now before the economic situation deterirorates and we see what is happening in Greece break out all across Europe.

We can see that the present puppets of the political system will not and cannot solve the problems we face, so therefore a new politics is called for.

History has been here before.

Once it was the Roman elite who hid in their palatial Ivory Towers and watched the smoke rising from the districts of the poor in the distance, but each night the fires grew brighter in their fury, the rioting mobs drew closer and the acrid smoke lingered longer in the morning air.

Soon the fires will be seen even in the bastions of the elite themselves, in their enclaves of wealth, whiteness and privelige - and they shall see all the lies and illusions that they have built upon the ruin and rubble of our nations burn down before their very eyes.

As once it was in Rome, so shall it be again.

Posted by Defender of Liberty at 06:48

One of your best posts yet. Thank you and good luck to the Greeks and to all nationalists.

Greece needs a junta like during Crimea to prevent societ access to the straits. Then they can scurry about blaming Armenians, Jews or Albanians in denial.

When I think of the saying nice guys finish last...By rioting these thugs have shown their disregard for the law and the safety of other people, so the Greek government should machine-gun all of them in the streets.

your last posted comment by Jack Reylan would indicate that he is either intellectually challenged or has smoked too much weed.

Everywhere this flotsam washes up there is unrest. I'm surprised it hasn't kicked off big time here yet, but you can smell it coming, the smoke is curling under the door already.
You can bet your life the police will turn against us.
The "list" has been an asset to them to round up known Nationalists, its also in the hands of dangerous fundamentalists.

It is only relatively recently I have borne witness to the partisan nature of the press and the managed outcomes of debates, particularly on the bbc.In only one instance have I seen the scales fall from peoples eyes, and that was on Question Time fairly recently when Christopher Hitchens was present and challenged both the audience - directly and the panel to justify the conditioned liberal response to, in this case the awarding of the Knighthood to Salman Rushdie and the folly of not doing so on the pretence of offending muslims. Mr Hitchens faced down the panel and the audience's intransigence and persuaded them to deny islam the right to dictate to a civilised society in such a way. Even Boris Johnson, also present on the panel supported this view after the audience realised that following the bravery of Hitchens(senior) in denying the liberal cant it was actually possible to have an opposing view and not be a pariah.
Forgive me if this is a rambling way of approaching the topic in question, but it illustrates that someone with an independant mind, that is brave,and of unquestionable intellect, and certainly not allied to nationalism can have a remarkable affect.Only when more like him are brave enough to stand and be counted will western christian civilisation stand a chance.Please watch the you tube video of the debate from Aldershot its quite remarkable.

Thanks to Anonymous above who posted the information concerning Question Time and the brave stance by Hitchens - and thanks also to the Youtube footage as mentioned.

And thanks Lee for atimely article on this issue about Greece.

First Greece, then it has been Spain. Then it may well be France or Italy, the Netheralnds... and who knows, Britain next on the list of volatile-fuelled immigrant's disaffection ignited by economic circumstances, a weak servile state and Islamic fury.

O/T but I thought you'd find this of interest Lee. It is how the EU interrogate, bully and intimidate a President who defends democracy:

And they call the BNP "nazis".