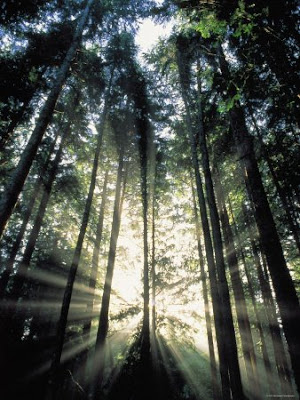 
Spring lifts its drowsy head from grassy verges,
As south facing hedgerows still white with snow,
Shiver and shift, as a myriad slumbering seeds,
Burst free from their bondage beneath the earth,
Reaching forth for the febrile rays of rising liberty,
Their furtive fronds unfurl to gaze upon grace,
As the returning sun, its wings of gilt unbound,
Sheds the chains of winter, steps down from the cross,
And mantles the sky with its glorious pinions,
Sweeping empyreal columns of sunlight beams,
Reaching out to earth as the hands of the Atum,
Or the cup of Christ that offers hope to the world,
As the trinity of Menw The Aged, the first Druid,
Whose three rays of the Awen, awoke the world,
The sacred cycle of the ancient gods begins anew,
Serenaded by snow drops, whose tender bells toll,
Exulting in the epiphany of sun, sky and light,
Fair winds fare forth from the south, whispering gently,
Seducing the coats and jackets from our bodies,
As we shed the inhibitions of our conventions,
In the heathen temples of towering tree, wild woods,
Sunshine soft upon our skin, so intoxicates us,
The quickening of sluggish blood awakens desire,
As two lovers lost in a moment, unbound and set free,
Tremble in the salmon leaps of sudden passions,
Sighing as songbirds scatter in flocks from her lips,
He bellows as a stag, breathing hard as if in battle,
Their bodies entwined, slick with rain and sweat,
Writhing in a rut of moss and mud on the forest floor,
As adders knot and thrust, hissing with pleasure,
Bestowing a sacred gift of fertility upon the land,
As upon the naked black bough of dusk and dawn,
The adoring fey buds of summer blush and swoon ,
As fingertips of breezes, soft upon their petals,
Entice the virgin branches, stripped bear by storm,
To surrender their tender buds for sweet fruits,
In the ancient rites of life, so the plough must pass,
And score the sighing soil with its siring blade,
That enters the wetted furrow and plants each seed,
Until the shoots sprout, then ripen into blossom,
As deeper delve the roots into the dark, moist soil,
Until both poem and sun become one, empowering,
The summer that blooms anew upon winters blank page.

Posted by Defender of Liberty at 05:45

I Like to see the Sun Flowers.I Appreciate your blog. It's really interesting. I really liked it. Thanks for sharing here..