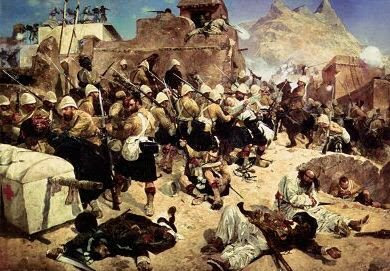 Image - The 92nd Highlanders at the Battle of Kandahar, 1st September 1880


In memory of Harry Patch.

The last Tommy left on earth,
Lived long enough to see,
A return to Empire, Great Britain at war,
Dust on the boots of broken troops,
Dragging their rusty rifles behind them,
On patrol in the ruins of Babylon.


The last Tommy watched live on TV,
As Blair and Bush unsheathed their swords,
And Parliament a toothless poodle, whimpered,
Then voted for war, rapine, murder and havoc,
The war for oil the oligarchs demanded,
The seed of 911, as a serpent unravelling.


The last Tommy saw Islam’s rise, a new Great Game,
Infidels dug deep into deserts sands,
Sheltering from the fire of farmers and shepherds,
Inching their way warily through poppy fields,
In bloom beneath the misty mountains,
Where Alexander, Elphinstone and Ustinov bled.


The last Tommy always remembered,
His brothers slaughtered in the mire,
Of Passchendaele, the groaning martyrs grave,
Where a generation found its Golgotha,
Boys waiting in trenches for battles to begin,
Each shard of shrapnel, a Roman spear.


The last Tommy always thought,
That wars were organised murder,
And that simple men like him,
From small towns and country hamlets,
Were fed to the machines, led abroad to their death,
A fact well grounded in his witness.

Mr Patch was 'The last of the Line.'

He and his comrades-in-arms must never be forgotten.