The New World Order Is Born 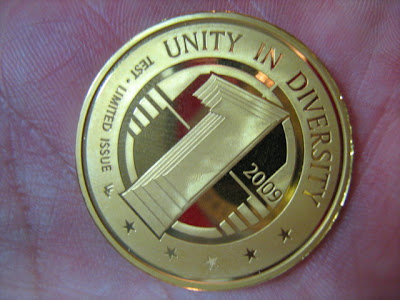 Image - The coin that killed democracy. Note the Liberal Fascist slogan on it 'Unity In Diversity' which is a slogan that Joseph Goebbels would have been proud of.

So the New World Order is about to be born.

A global currency will require a global bank and a host of supra-national institutions to control it.

Therefore a global currency means the death of nations and democracy.

July 10 (Bloomberg) -- Russian President Dmitry Medvedev illustrated his call for a supranational currency to replace the dollar by pulling from his pocket a sample coin of a “united future world currency.”

“Here it is,” Medvedev told reporters today in L’Aquila, Italy, after a summit of the Group of Eight nations. “You can see it and touch it.”

The coin, which bears the words “unity in diversity,” was minted in Belgium and presented to the heads of G-8 delegations, Medvedev said.

The question of a supranational currency “concerns everyone now, even the mints,” Medvedev said. The test coin “means they’re getting ready. I think it’s a good sign that we understand how interdependent we are.”

Medvedev has repeatedly called for creating a mix of regional reserve currencies as part of the drive to address the global financial crisis, while questioning the U.S. dollar’s future as a global reserve currency. Russia’s proposals for the G-20 meeting in London in April included the creation of a supranational currency.

You can see the speech by Medvedev here:

Find out about Obama's NWO agenda: