The Guardian - Blondes Are Nazis 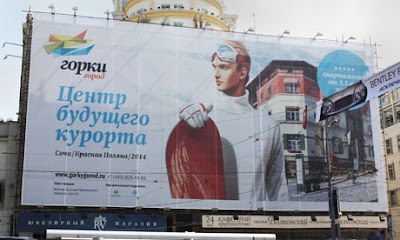 Image - a blonde person. Must be a Nazi.

Only the morons in The Guardian would write an article like the one below.

I guess they want pictures of black, deadlocked, African snow boarders to show how diverse sports like ski-ing, swimming and snow boarding and ice skating are.

I guess any images of blue eyed blondes = nazis.

I was blonde and blue eyed as a kid - I guess I was a Nazi, until my hair went red / brown and then went grey.


A promotional campaign linked to the 2014 Winter Olympics is stirring debate in Russia because of its use of allegedly "fascist" imagery.

The campaign employs images of blue-eyed, blond sportsmen and women which have been described by critics as "neo-Hitlerite" and "like something from a Leni Riefenstahl film".

Images of an Aryan-looking snowboarder and an ice-skater gazing into the middle distance dominate giant billboards in Moscow and feature on the cover of brochures to advertise Gorky Gorod, an elite housing complex being built at Krasnaya Polyana near Sochi on Russia's Black Sea coast. The complex is a private-public partnership which will be the Olympic media village at the 2014 Games.

"Without doubt the authors of this advertising were inspired by Nazi art," said Ekaterina Degot, a well-known art historian and former curator at the State Tretyakov Gallery.

When the billboards were put up, the Russian art collective Voina, itself known for its controversial painting of a 65-metre penis on a drawbridge in St Petersburg, tweeted: "On Pushkinskaya Square opposite Gap, there is a huge advertisement, openly fascist in style, for elite housing in Sochi."

Degot and others said the style and pose of the subjects in the images was heavily suggestive of Nazi art which stresses racial purity and superiority.

The Guardian has learned that the images of the sportsmen were produced by Doping-Pong, a St Petersburg-based design company which uses a swastika as one of its online "banners".

Doping-Pong also works closely with Katya Zashtopik, a Russian artist in her 20s who is known for her sympathies with the ultra-right, and who uses the online avatar Dopingirl.

On 20 April, Adolf Hitler's birthday, she published a yellow "smiley" on her blog embellished with a toothbrush moustache and a slick of black hair. The caption read: "Happy Birthday."

Dima Mishenin, one of the designers at Doping-Pong, denied a report that Zashtopik was personally involved with producing the Gorky Gorod images. "It's our work, not hers," he said.

Mishenin claimed he had no sympathy with far-right ideas, but said he believed "the Olympic aesthetic starts in Berlin in 1936 and is created by Leni Riefenstahl".

He added: "For me this is about the aesthetics of beauty."

Asked about the use of Nazi iconography in his other work, he said: "When I use a symbol of culture of Nazi Germany like a swastika then, of course, I use it as a representative of the victor nation."

In an earlier interview with Russian media he said: "These symbols are trophies, like skulls on our Slavic fence."

Some observers said criticism of the Gorky Gorod images was overblown.

Artemy Lebedev, one of Russia's most famous young designers, wrote a blogpost calling the billboards "neo-Hitlerite, neo-Stalinist" but praised Mishenin for his creativity.

One 26-year-old web designer told the Guardian: "What's fascist and Aryan about it? Just because the snowboarder doesn't have a potato nose doesn't mean he couldn't be a Russian."

Mikhail Fedotov, Dmitry Medvedev's adviser on civil society and human rights, said he was troubled that a company which "played games with Nazi symbols" had been employed.

Gorky Gorod issued a statement from its creative director, Dmitry Leshchinsky, who hinted at a conspiracy to discredit the project.

"Any association with fascism is very unpleasant to us, and the opinions and methods of several 'critics' provoke exactly those kinds of associations," he said.

"The publishing of disgusting labels and the promotion of 'pasquinades' in the media; destroying and pouring dirt on everything that stands out, even by the smallest margin, from the grey mass of advertising: that is real fascism, in my opinion."

Degot said: "In itself, there is nothing forbidden about working with Nazi aesthetics if it is the basis of critical intellectual activity. However, I don't see that reflex in these compositions [on the billboards].

"This is a commercial project, openly exploring the seductive potential that the new rich see in Nazi style.

"I think that must be a reflection of the pretensions wealthy young people have to aristocracy and tradition."

Posted by Defender of Liberty at 00:17

Re "Twat's", I just love it when you go all phillisophical on us :-D

The same argument existed about Nazi science, the critics seemed the think the results should be invalid because they were unethical, like science is some kind of game. These people want the holocaust completely isolated from any context whatsoever, just a shining beacon of guilt and self flagelation for the west.