Tower Hamlets and the Truth 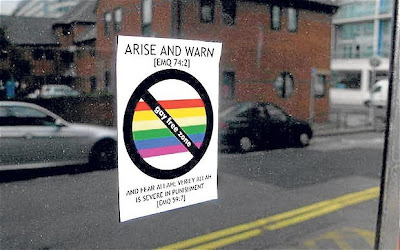 I am glad that the foot soldiers of Islamism are enforcing their will on the streets through terror and violence - as by doing so they are exposing to everyone their real agenda and what the future holds for us all once they become a majority in our country and communities.

You reap what you sow.

The more Tower Hamlets becomes an Islamist colony, the more the idiot voters and the idiot politicians have to face the facts that they are the truly guilty ones.

You idiots voted for the idiot politicians that let them all into our country.

You want to know who is responsible - you are.

All you gutless liberal journalists that scream about racism and attack anyone who wants to keep Britain British, as opposed to an Islamic colony.

All you idiot voters who voted labour / Tory / Liberal and all the other 'lets import in cheap workers and cheap votes' pro-immigration and pro-multi-culturalism supporting political parties.

I wodner how many Homosexuals live in Tower Hamlets ? If none then why not? Did they vote for the ''liberals'' liblabcongreenukip

Maybe if the had a gay club in TH may change the place and have real dicersity?

Whats Tatchell doing about TH and nogayflyzone? Nothing of course. Its only ''homophobic Whitey '' he attacks...

and they were paid handsomely for it lee, and you know what they wont give a crap, they will move their middleclasses to another town should things get too hot and the working classes the liberals claim to care so much about will be left with hell on earth yet again.

but then again Lee, out people were manipulated into their own ethnicide, out people too ignorant and mind controlled to think ahead.

this leaves me no faith at all in human nature once the media works it's evil for thier puppet masters that again, pay them so well.

but let's remove the masks off the so called liberal media, the prestitutes that back the wars and claim it is for peace, that knowingly destroy and enslave on a daily basis their own extended families through their lies.

Their extreme racism and total unconcealed hatred that they clearly posses, yet hide under a banner of anti-racism.

No Lee they won't care, they will simply whore themselfs for as long as they can spreading their hate and destruction for their own personal gain, not until the the pieces are beyond saving will they realise and then they will emigrate to escape the `paradise` they created.

the media will be propped up as it is nothing but a propaganda wing, as long as their are at least two opposing papers and mopre importantly the control of tv they will maintain their grip until the last and even should the people realise something is utterly wrong the prestitutes will serve their corporate masters and load the people onto the cattle trucks.

Oh yes the double standards really are that severe, yet the gullible public will never notice, so well have the prestitutes totally and utterly destroyed them and all that was humanity and every positive attribute.

Trojan horses of hate, out for personal gain and to spread their hatred of the British and humanity.

The left media whores know the corporates control the show, control their wage packets, have them on a little string, yet some are still stupid enough to think that their corporate bosses would like to bring about some marxist utopia and that they are part of the big picture.

They are often stupid enough to claim they tread the path of freedom, as they silence and oppress!

prestitutes to the corporates each and every media whore, propagandists for evil, war and murder.

and these warmongering self serving fascist (EU) scum look down at peace loving, stability loving, democracy loving, self sustaining nationalists who just wanted to benefit the nation as a whole, while helping to free other nations from corporate enslavement.

The press are the excrement of humanity and the total opposite of conservitism and marxism.

Well said mate and as it all continues to unfold, the hand wringing liberal anti nationalist traitor morons will run to Nationalist movements telling them how terrible it is .
I couldn't live with myself, my conscience , not just knowing I contributed to it, but then to attempt to deny it; I would hate myself and rightly so.

They will all be remembered , just as the brave British Heroes who have their name inscribed on monuments.

We need granite Traitor Monuments when a Nationalist Government comes to power, for our people to remember what happens to Judas scum..

I will enjoy watching how they decide to spin this one (if it ever even enters discussion).