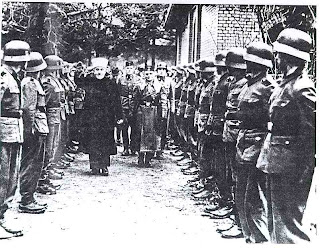 
Finally a politician in the world with the bollocks to deal with the Islamists and the Liberal apologists for Islamist terrorism properly.

Musharraf is a Pakistani Nationalist, not an insane Islamist dedicated to the destruction of the Pakistani nation and its absorption into the global Caliphate and nor is he a deluded Liberal sap whose worship of the democratic principle will lead to the destruction of the nation, the state and democracy itself. His sole intention is to defend the Pakistani state and nation from the two headed Hydra that threatens it most - those of the Islamist terrorists and the Liberal apologists and supporters of Islamism.

When democracy is being used as the primary mechanism for the takeover of the nation and the state by Islamists, then democracy must be controlled.

The Nation and the State exist before the principle of democracy. When the democratic principle itself is being used by Islamists and Liberals to destroy the Nation and State then a new Directed Democratic Model must be imposed.

If the Liberals get their way then in the name of the 'relativism' that is at the heart of Liberalism, the Islamists will be treated as political equals in the political process.

Once the Islmaists with the help of the Liberals have built a political and social base in the nation, then they use that base to destroy the nation, the state and democracy itself.

Edmund Burke said all that is necessary for the triumph of evil is that good men do nothing.

In Pakistan and Britain today the Liberals actively work with the Islamists to do evil. They both work to destroy democracy through democracy.

The Liberals are as insane as the Islamists.

This is why Liberals were called 'useful idiots' by Lenin and why the most outspoken supporters of Islamism are Liberals.

Liberal idiots like the solicitor Gareth Peirce, the lawyer for Mozzam Begg, Bisher Amin Khalil al-Rawi, a detainee at the Guantanamo Bay detainment camp and Abu Qatada (who has been called 'Europe's Al-Qaeda Ambassador') are the sort of Liberals that work for the Islamists.

I bet the last people Gareth Peirce would represent would be members of the BNP - the hypocrital bitch is more than happy representing Al Qaeda leaders though and members of the IRA.

She is the sort of 'Liberal' that deserves to be in prison for her support and assistance of the terrorists that threaten our society, not feted by the liberal scum that are poisoning our country.

Both are the enemies of our people, society, democracy, nation and state.

If the Liberals in Pakistan have their way then via the democratic process the Taliban will be allowed take control of the Pakistani state and have access to nuclear weapons.

The Liberal Consensus is itself an artefact of the 20th century, it is no longer relevant in any way to the security needs of the 21 st Century.

The liberals that mutter abour democracy whilst arse licking the Islamists are the most dangerous inner enemy we have ever had to face.

Whilst the media and the liberals prance about talking a load of bollocks about the dangers of ' white racism' and 'neo-nazis' - the real racists and the real nazis are the closest allies of the Liberals.

It was the Islamists who ran the death camps for the nazis in World War 2, who murdered tens of thousands of Christians wearing the SS uniform and whose ex-members of the SS set up the Muslim Brotherhood that was the nucelus for Al Qaeda.

The Liberals are the apologists for Fascism and the Islamists the real nazis.

As the Liberals once supported the murderous Communist regime then now find themselves supporting the Islamist remnants of the Nazis.
Posted by Defender of Liberty at 05:35